A Day in the Life of a Middle School Principal 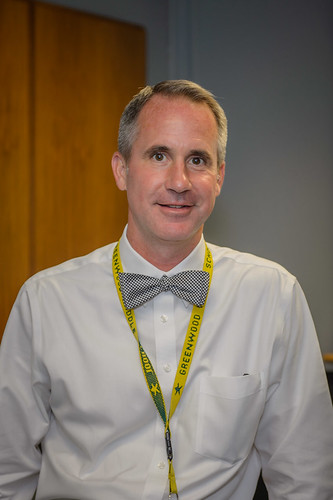 Most people don’t walk into their office at 6 a.m. to start their workday. Yet, Greenwood Middle School (GMS) Principal Chris Sutton does just that– Monday through Friday, when the community’s 900 students are in school. That time of quiet before students and staff arrive helps him prepare for the day. Assisting with breakfast duty at 7:30 a.m. and broadcasting the morning announcements keep Sutton busy until after 8 a.m.

As the morning progresses, the rhythm quickens with Sutton attending meetings, answering phone calls and typically helping in the cafeteria for a couple of hours. The latter is one of his favorite moments.

“Being at lunch is one way I get to know the kids. I can see them in a relaxed atmosphere and talk individually with them,” said Sutton.

Student relationships are important to Sutton, but he didn’t initially plan a career in education. After taking a couple of introductory business classes his freshman year at Indiana University, he decided to drop business and pursue education.

“Teaching was always in the back of my mind,” said Sutton.

Growing up in Greenwood, Sutton had many great teachers who influenced him. When he was a sophomore in 1984, Carolyn Hayes, a Center Grove High School teacher, created an exciting classroom experience for learning biology.

“She was smart, she made learning fun and you could tell she loved teaching,” said Sutton.

His freshman English teacher, Karen Wilkerson, made a significant difference in his communication skills.

“She could tear apart my papers, red ink and all, in the gentlest way. I became a better writer after having her class,” Sutton said.

Sutton’s love for social studies began in Mike Bodine’s sixth grade class where he, too, “made it fun.” 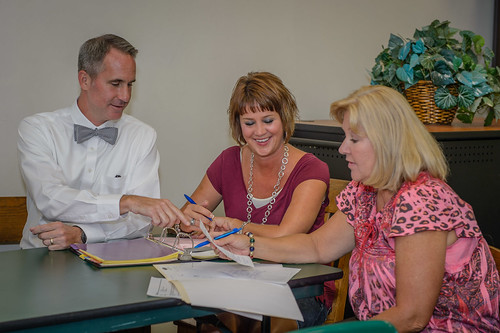 “By far my biggest administrative mentor,” he said. “She gave me just enough work to learn the job and supported me when I needed it. And she made coming to work fun!”

When Noblitt replaced Helen Crawford as Greenwood Community Schools’ Curriculum Director in January 2014, Sutton was her logical replacement. As he explained how being principal is quite different, Sutton smiled and said, “There’s a lot more communication with a lot more people. Now the buck stops here. However, I’ve always had comfort in the decisions I’ve made. I know that if it’s what’s best for the kids, I can sleep well at night.”

But that doesn’t mean he hasn’t has great challenges as GMS’s principal.

“Motivating the kids to do their best, dealing with what we need to do within budgetary restraints and giving the kids what they need emotionally, socially, and academically,” Sutton said.

But Sutton is quick to say the satisfactions outweigh those challenges. He enjoys trying to make the kids and staff happy as well as living in the community where he can interact with students even after they’ve been gone to high school.

“But I get huge satisfaction in seeing a struggling sixth grader grow into an eighth grader who is mature and ready for high school,” he said.

Embracing the Role
A typical afternoon in the GMS principal’s day starts with more announcements, more paperwork and meetings dealing with the budget, teachers and parents. Sutton also attends monthly principals’ meetings at the school corporation’s central office, led by second-year superintendent Kent DeKoninck. He notes communication is vital in his job and requires much of his time.

When asked to remember a difficult day as principal, Sutton said, “A tough day is when there are things beyond our control to fix in kids’ lives. They’re ours from 8 a.m. – 3 p.m. We hope when they walk out the door at 3 p.m., the lessons they’ve learned carry on becoming a positive influence.”

However, Sutton is quick to mention. most days are routine and many are extremely fun.

“Each year one of my best days as principal comes during our annual canned food drive convocation before winter break,” said Sutton. “We announce the totals and highlight the good they’ve done for the community.”

His passion for providing service learning for GMS students and staff extends past the food drive. They also contribute to Riley Hospital for Children at IU Health by participating in “Hats On for Riley.” Students and staff pay one dollar to wear a hat for the day. During the winter convocation, Chris asks students to stand up if they have a personal connection to the children’s hospital. He’s always surprised by how many are standing.

“Hopefully giving back to the community is a habit that will carry on into their adulthood,” said Sutton. 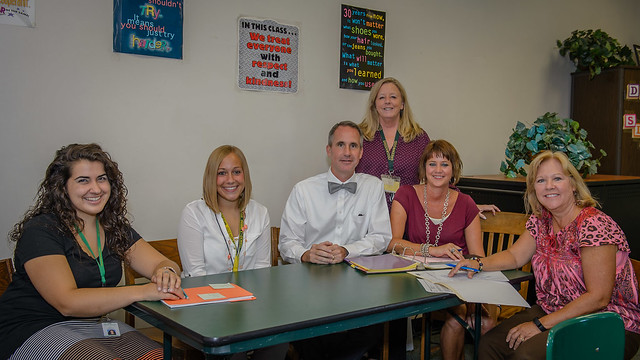 Developing the Vision
Sutton advises first-year teachers to “be patient with the kids, get to know them, and let them know you care.”
He wants those teachers to “make those connections and love what they do.”
Sutton achieves those connections by being present during the school day and attending extra-curricular events. And his daughter – 7th grader Ella – keeps him in touch with what’s going on in a middle school student’s daily life. His son, Harrison, is now a sophomore and Sutton smiles as he notes that he and his wife, Anna, are now saturated by the daily concerns of teenagers.​

His long-term goals for GMS would include leading the county in ISTEP scores and service learning opportunities.

“If I woke up and saw in the newspaper that our ISTEP scores were top in the county and that our school was a model for service learning, it wouldn’t get much better than that,” Sutton said.

There isn’t much Sutton would change about his job.

“The amount of emails I get daily— anywhere from 80 to 100, all needing my personal attention,” said Sutton. “But I wouldn’t change a lot. I’m happy to be one of those guys who loves his job. If my compass is always what’s best for the kids, then everything else falls into place.”