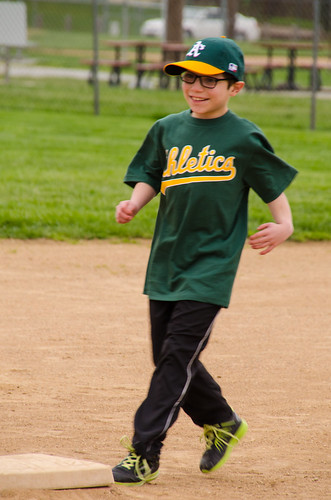 The field is lined. The bases are down. The players are seated in the dugout. However, this isn’t your typical game. A runner picks up the ball while rounding third base. At the same time, one of the infielders is playing a game of catch with another ball.

The Challenger Division, a unique division of the Greenwood Little League, gives boys and girls with physical and mental challenges the opportunity to enjoy baseball.

It’s a game measured by smiles, not runs.

The Challenger community meets Friday nights at the Greenwood Little League fields for its unique brand of baseball. There are players in wheelchairs. There are players with cerebral palsy. There are autistic players. No one is judged. Everyone plays, everyone bats and everyone runs the bases. Games are two innings, and there are no outs. The inning ends when every player has had a chance to bat.

Little League Baseball established the Challenger Division in 1989 to help everyone play the game regardless of his or her physical ability. Today more than 30,000 children and young adults participate worldwide. There are 60 players — an increase from 48 last year — in the Greenwood division.

Players are divided onto six different teams. Organizers try to make the experience as authentic as possible. Each team has a coach. Players wear Major League Baseball replica uniforms and caps, and the children’s names are announced over the public address system.

For third-grader Campbell Nieman, it’s simple. She just wants to play. “I like hitting the ball and running bases,” she said. One day, Campbell wants to be a fashion designer. For now, she’s quite content with the royal blue Chicago Cubs cap and jersey she wears during games.

This division is about having fun for Campbell who has cerebral palsy. But it means so much more to her father, Tim Nieman of Franklin. He ran onto the field to snap a picture of his daughter as she rounded third base on her way to scoring a run. “Just the excitement to know that she’s happy, that’s what I like,” said Nieman, a newcomer to the division. “To know that the other kids are just like Campbell, and they’re not going to make fun of her.”

Nieman wouldn’t mind seeing his daughter learn some of the fundamentals of the game. However, just seeing Campbell on the field is enough. “It kind of breaks my heart that she [normally] can’t keep up with other kids,” Nieman said. “She can’t run. She has trouble walking. She would struggle in a regular division.” 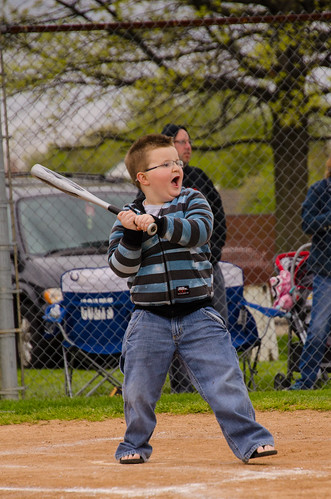 Those who struggle in the Challenger Division receive help from peer buddies. Parents, siblings, friends and volunteers assist the children in all aspects of the game. They hold the bat for those who can’t, push a child in a wheelchair around the bases and stand by them in the field. Most of the time, there are more peer buddies than players on the field.

Dominick Semonik, a third-grader at Isom Central Elementary School in Greenwood, needed help running the bases when he first joined the Challenger Division three years ago. “They actually picked him up and carried him around the bases,” his mother Bridget Semonik said. “You couldn’t ask for anything more. That’s how this division is.”

Dominick, who plays for the Red Sox, has mitochondrial disease. His body doesn’t properly produce energy from the food he eats. He gets tired very easily. “It’s like his battery is only half full,” Bridget said.

Playing in the division gives all the children the opportunity to see that they are not alone, that they aren’t the only ones dealing with issues, Bridget said. “For five or six days a year, it’s a break from all the things they have to deal with. These kids have a hard life.”

That hard life rarely shows on the field because everyone is having such a good time. So if one of the players wants to pick up the ball while running the bases, no one seems to mind. “That’s what makes the difference,” said Sheila Leachman, the coach of the Oakland A’s team. She doesn’t dwell on the children’s disabilities while she’s on the field pitching to her team. She has just one goal. “I never feel sorry for them,” Leachman said. “My goal is to make sure they all have fun. That’s what it’s all about.”