Greenwood
Home›Indiana›Greenwood›Keeping Greenwood on the Move

Keeping Greenwood on the Move Left to right: Brent Tilson, President of the Redevelopment Corporation, Mayor
Mark Myers and Dr. Patrick Spray, Superintendent of Clark-Pleasant Community School
Corporation. They stand near a new roundabout at Sheek Road and E. Worthsville Rd.,
just west of I-65.

Infrastructure and road construction projects were highlighted at this year’s State of the City address. These projects are planned to help ease traffic and expand the road network in Greenwood. As Greenwood continues to grow, the need for the roads to accommodate the increased population becomes more and more important.

City Engineer Mark Richards said the City typically does what is called mill/overlay projects annually in order to bring streets up to a serviceable condition. The City intends to continue this annual tradition, and Mayor Myers highlighted upcoming mill/overlay projects.

“Mill and overlay work is based on condition ratings of the roads. Our last rating was done in 2010, and we are currently working with a consultant to update the ratings for all 210 miles of City streets,” said Richards.

MAIN STREET AND GRAHAM ROAD TRAFFIC SIGNAL
One project includes installing a signal at the intersection of Main Street and Graham Road. While normally various alternatives exist for any given project, Richards said the options for the Main Street-Graham Road signal project are fairly limited.

“The Graham Road project completed in 2010 was designed to include a signal at the intersection, but the intersection did not meet traffic warrants for a signal at that time,” said Richards. “Only a limited amount of work was necessary to reach the construction stage as evidenced by the smaller project budget.”

The Main Street and Graham Road traffic signal construction is expected in the summer to fall 2016 timeframe. Funding for the project is expected to be $420,580.

INSTALLATION OF TRAFFIC SIGNAL PREEMPTION EQUIPMENT
Installation of traffic signal equipment is another project on the horizon. The installation is intended to begin in spring 2017 and will be approximately $943,008 in costs.

The purpose of the traffic signal preemption equipment is to ensure emergency vehicles smoothly go through intersections when on emergency runs.

“The equipment uses GPS in public safety vehicles to identify their position and route when on emergency runs,” said Richards. “As an emergency vehicle approaches an intersection, the signal for the route taken will either be held on green or changed to green, so the intersection can be cleared, allowing the emergency vehicle safe and easy transit.” 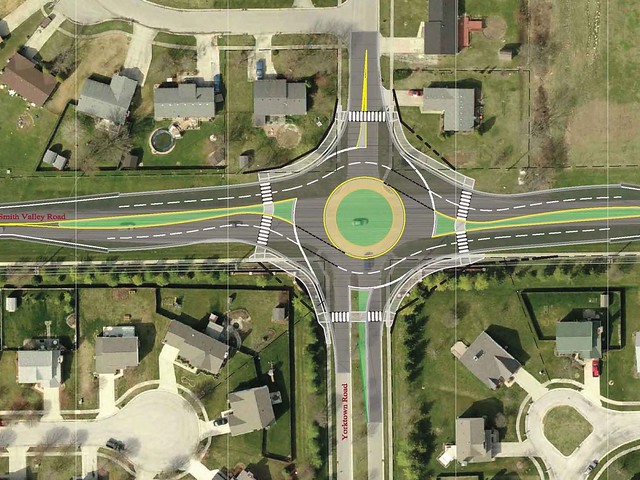 While roundabouts tend to cause anxiety with drivers not used to these types of intersections, City Engineering is researching ways to utilize roundabouts to help traffic flow.

“At my instruction, City Engineering is also pursuing roundabout solutions to some of our most troublesome intersections,” said Myers. “But by no means will Greenwood become the next Carmel who must be trying for some type of world record.”

In 2011, Greenwood had a citywide traffic study completed which identified the Smith Valley Road and Yorktown Road intersection as being the top rated location for improvements for all intersections under 100 percent control of the City, said Richards. For those residents in the many neighborhoods off Honey Creek and Yorktown, this change will be a welcome one. Turning left from Yorktown and Smith Valley has long since been a challenge and continues to get worse.

The Smith Valley Road and Yorktown roundabout is expected to begin in the summer of 2017 and will cost approximately $1.67 million. 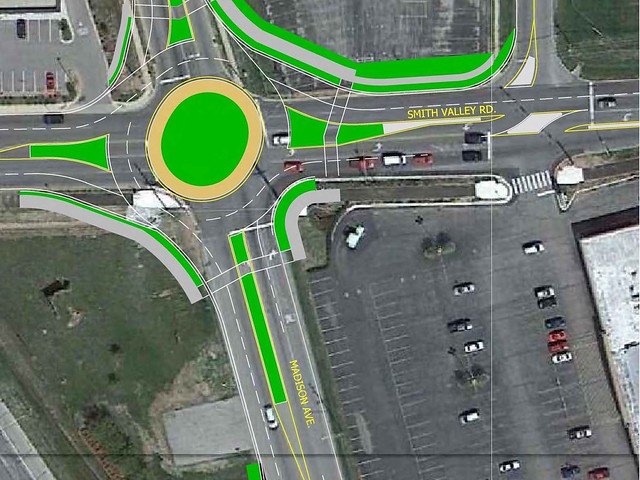 At least five options exist for the roundabout project at Madison Avenue and Smith Valley Road because of the complexity of the intersection and the surrounding area.

“We try to maximize safety and operating efficiency for all projects while managing cost,” said Richards.

“We are currently designing improvements to the corridor that will expand the four-lane road both east and west of the original project,” Myers said in his address.

Construction is expected to begin in 2019 with approximate costs of $11.75 million.

PROJECT TIMELINE
One project is not higher than the other in terms of priorities, but each project is dependent on funding that year, said Richards. The two traffic signal projects and Smith Valley Road and Yorktown Road roundabout are expected to take approximately two to three months to complete individually. The Smith Valley Road and Madison Avenue roundabout and Worthsville Road project are expected to take an entire construction season to complete.

Official detour routes are not yet set as they will be determined as part of the construction plan development.

PROJECT FUNDING
Funding stands as the roadblock. It depends upon the location of the project and ability to obtain federal funds, said Richard.

“Mill and overlay work are largely funded through ‘Local Roads and Streets’ and ‘Motor Vehicle Highway’ funds received from the State,” said Richards. “New construction and reconstruction projects are generally funded through TIF and/or federal funds. The federal funds are awarded through several programs such as Highway Safety, Congestion Mitigation and Air Quality, and Surface Transportation Program.

The City works hard to use TIF (Tax Increment Financing) dollars to pay for local matches on federal projects when they can. TIF is a public financing method that is used as a subsidy for redevelopment, infrastructure and other community-improvement projects in many countries, including the U.S.

“Each of our major TIF Districts are important to Greenwood’s growth,” Myers stated in the address.

LOOKING TOWARD THE FUTURE
Funding will continue to be a goal as the city has a number of other projects on their “wish list” for infrastructure development.

“We always have projects on our wish list but must live within our financial means,” said Richards. “We have tried to leverage federal funds to make City dollars stretch as far as possible, but there is a tremendous amount of competition for federal funding throughout the Indianapolis Metropolitan Planning Area.”

However, several projects are on the horizon extending out through 2019. The goals of these projects are to improve safety and traffic flow throughout Greenwood.

“We can work to build the best system of roads in the State, but a system only continues to function if it is maintained,” said Myers.

Kim Dodson: A Hero for the Special ...