Greenwood
Home›Indiana›Greenwood›Time for a Change 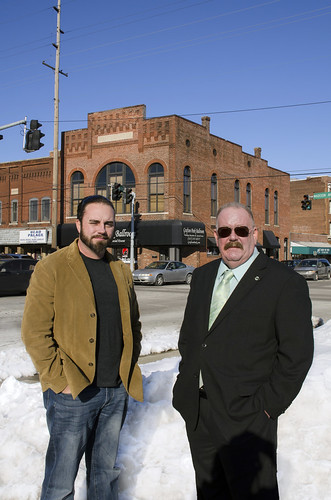 Tear them down. Tear down all the historic buildings along one long block in the heart of Greenwood. Sitting on that block are multiple businesses and the First Baptist Church, a congregation that existed 25 years before Greenwood became a town. The city was quietly having all the land and buildings appraised in 2010 to possibly buy and then tear them down. That news startled city resident Jennifer Hollingshead into action.

Daily long lines of traffic fill the narrow intersection of Main Street and Madison Avenue in downtown Greenwood. Many of the brick buildings appear past their prime. Shoppers no longer throng streets, which now mainly serve as a pass-through for hurried commuters. But what was the point in demolition and radical restructuring of that long block?

The 2010 administration of four-term Mayor Charles Henderson believed that approach was the first part of a plan to revitalize the oldest part of downtown. A plan was proposed that would tear down all the buildings on the south side of Main Street going east from Madison Avenue to Meridian Street. The street would be widened, and new businesses built would be set far back from the road. The goal was to make the downtown area look more appealing and to draw in customers who liked to shop, dine and relax in Greenwood. Surely, the citizens would embrace such a worthy goal.

However, Hollingshead was puzzled. How would that concept unplug the daily traffic bottleneck at Madison and Main Street? The traffic going west would still have to funnel back into single lanes at that corner to continue traveling west, north and south. In addition, Hollingshead felt like the planning was being done behind the scenes as she found out about it from a nonpublic source.

Fearing an irretrievable heritage might be lost, Hollingshead took to Facebook in April 2010 and created the “Restore Old Town Greenwood” page. She made the case for restoring that part of the city, which was within walking distance of her home. How can we stop this, she asked the community?

She convinced her mother and fellow Greenwood resident Jo Ellen Villines to come with her to a meeting with Indiana Main Street. They learned that although Greenwood’s historic downtown district is on the National Historic Registry, that does not prevent buildings from being purchased and demolished. The designation only makes that process longer.

Hollingshead was advised to hold a public meeting to see if there was community support for restoration over demolition and rebuilding. That first gathering occurred in the basement of the church in the targeted area.

A small band of neighbors began working with Indiana Landmarks to gain a better idea of what could be done to improve the downtown area. Indiana Landmarks placed downtown Greenwood in its Top 10 list of most endangered historic sites.

That generated news stories and visibility to the issue. The City of Greenwood and Henderson hosted a public meeting about the proposed changes before the primary mayoral election of May 2011. Hollingshead thoughts after the meeting were, “Whew! All this torn down?”

Henderson lost his bid for a fifth term. Candidate Mark Myers won the primary and went on to win the general election in November.

Twelve-year resident Ezra Hill got involved with the downtown issues. He really enjoyed the quality of life when he moved to Old Town Greenwood. “I can park Friday night and not have to drive anywhere all weekend.”

However, Hill often wondered why the downtown district had so many unresolved issues. Why didn’t they do something about it? “Then I realized ‘they’ could be me,” he said.

He also ran for city council and began representing District 2 in 2012. That district covers about three-fourths of Old Town.

Chuck Landon, a nearby Old Town neighbor, owned businesses for 30 years in the Greenwood area. He was part of a 2007 planning commission to design a comprehensive plan for Greenwood. As a member of the Economic Development Commission, Landon worked to ensure ROTG concerns were heard. 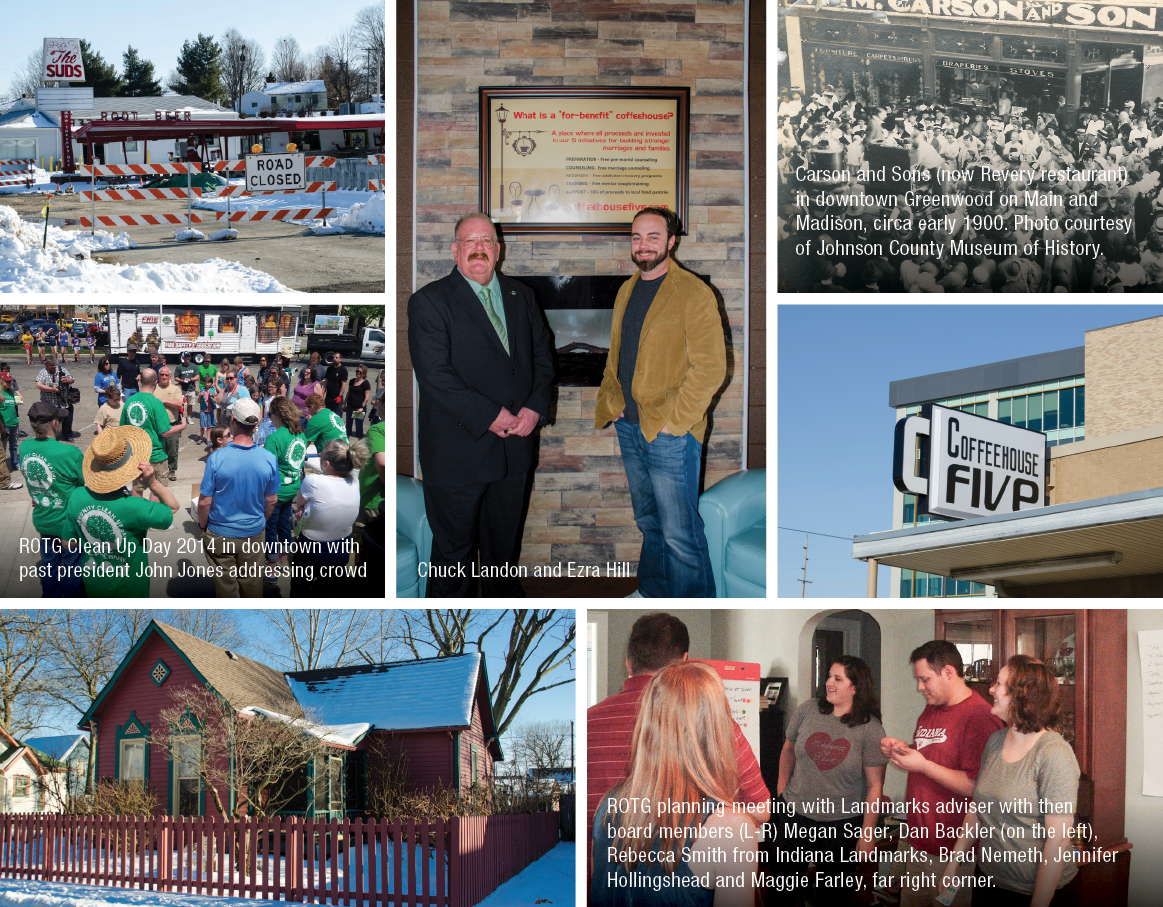 Once ROTG attained legal status in January 2012 and they immediately applied to be an Indiana Main Street (IMS) in order to gain assistance in generating economic revitalization and restoration of the downtown areas.

Becoming an Indiana Main Street in October 2012 qualified the city to apply for a $40,000 study grant from the Indiana Office of Rural and Community Affairs (ORCA). Those grants fund development of sustainable economic possibilities. If a viable revitalization plan is accepted by ORCA, a $400,000 grant can be sought to begin the work.

The City of Greenwood was awarded the study grant. By accessing the 2007 Comprehensive Plan and taking public feedback in three heavily attended community workshops, HWC Engineering honed a detailed, large-scale set of guidelines for the revitalization. It covers five main areas of downtown, four of them surrounding the historic core. Axis Architecture designed proposed façade improvements for buildings within the historic district.

HWC brought the enthusiastic public feedback and the 150-plus page plan before the city council in late 2014. Several councilors were not in favor of the plans for restoration. They envisioned building a roundabout at Main and Madison to deal with continuous traffic problems. Multiple historic buildings would need to be torn down to accomplish that goal. However, the overflowing crowds attending the subsequent council meetings in January made their displeasure clear. Supporters favored revitalization through restoration.

Timing was critical in order to prepare an application for the $400,000 grant from OCRA to fund building façade improvements. The council defeated the plan in December and January 5. Another vote came up two weeks later.

Hollingshead posted on Facebook January 19, 2015 – “We’re so excited that the revitalization plan for Greenwood was passed tonight. Many of us have spent four years hoping we could possibly get a grant for downtown. Chuck Landon, Ezra Hill and myself spent the last year going to meetings to help draft the revitalization plan. I can’t even imagine how the building owners are feeling after years and years of nothing but talk. Thank you all so much for your help, speeches, and letters to city council to make this happen.”

The $400,000 revitalization grant application will be submitted by the city by June 5. Because it is an Indiana Main Street grant, ROTG’s existence qualifies the city to apply for it. In mid-March, the Johnson County Community Foundation awarded the City of Greenwood $5,000 to fund the maintenance fund. This enhances the chances of the grant being awarded. Awards will be announced August 3.

Greenwood’s Redevelopment Commission has set aside funds as part of the grant process or, if it is not awarded to Greenwood, there will be enough to begin planned improvements.

Fourth year Mayor Mark Myers, many concerned citizens, city councilors and business owners have labored for years to see change become a reality. That time for a change has come.

People interested in knowing more may email RestoreGreenwood@gmail.com or go to restoreoldtowngreenwood.org.

The Manor at Somerset – Fischer homes