Jerry Cieslak is a man of diverse passions. Based on the large plumbing truck parked in his driveway, you might expect the flat, metallic smell of pipes and oil around his yard. A glance at the dozens of trophy fish mounted might remind you of fresh air wafting off a clear Canadian lake. But the intense fragrance all around his home is from the innumerable flowers carefully planted around his property north of Zionsville.

“I plant more than 50,000 annuals every year,” he says proudly. “I’ve got up to a couple million tulips and daffodils.”

Cieslak’s extensive garden draws interest from tour buses, garden clubs, photographers and people looking for unique backdrops for family portraits. And there’s a story behind many of the annuals.

“A lot of the flower bulbs are from old farmhouses,” Cieslak says. “When the owners die and the heirs sell the property, I get permission to go in and get some of the bulbs. Some of them are more than 60 years old. They might have 150 bulbs all matted together and out of those you might only get a dozen that bloom.

“A lot of times (the heirs) come back and thank me for saving their Mom and Dad’s flowers,” he adds. “They feel like their parents are up in heaven looking down, glad to see somebody taking care of their flowers.”

Jerry has always enjoyed gardening and fishing, but he threw himself into his hobbies after losing his wife and son in a terrible car crash 19 years ago.

“After the accident, I had a hard time for four or five years,” Cieslak says. “But I decided to try to help myself and create something I’d never seen before. I also started fishing seriously again, and that’s been a big help.”

Each spring, Cieslak hires troops of kids from surrounding neighborhoods to get the annuals in the ground. Planting that many flowers across his five-acre spread takes many hands, but he’s learned shortcuts to save time on maintenance — and all without using any chemicals or pesticides.

“We can get all of the annuals in within a week,” he says. “But that’s because I have good dirt – I call it my ‘black gold’ – and we have everything set up properly. I plant the flowers close together, so I don’t really have a weed problem. By the time the weeds come up, the flowers are already six to eight inches tall, so they shade the weeds.” 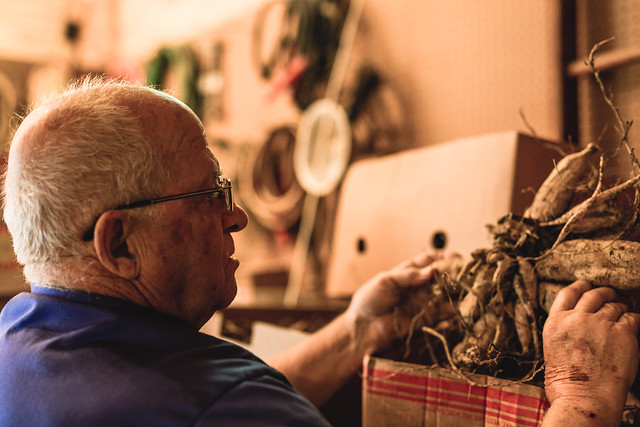 For fertilizer, Cieslak uses his own compost and adds ashes from his fireplace. To control bugs, he positions praying mantis nests around the flower beds. Neighborhood kids often join him on his rounds, picking up scraps of gardening knowledge and a love of nature. Which is generally a positive thing, but not always.

“I had one little boy who watched me and wanted to make his own compost,” Ceislak says. “Then his mother started noticing a smell in the house. He was making his compost behind the couch.”

Cieslak laughs, “I told him no, no, that goes outside.”

Neighbors and customers of Cieslak Pump, Well and Water System Service often find surprise bouquets left on their porch. Cieslak says that this sometimes causes a bit of confusion when husbands get unexpected thanks for a bouquet from their wives. But the mystery is generally solved when several households on the same street get flowers the same day.

He’d have to share an awful lot to even make a dent in his garden. Even on a rainy, windy, early spring day, there are thousands of tulips in bloom.

“You can see flowers from every window in my house,” Cieslak says. “And you can’t put a price on that.”

2017 Avon Dad of the Year Finalists