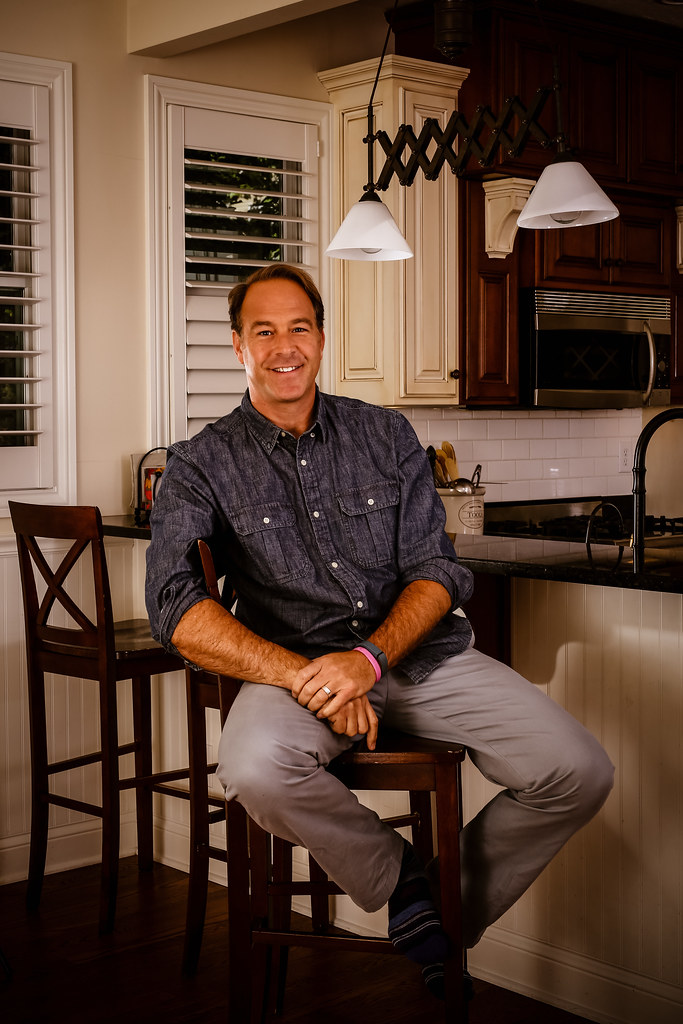 He’s polished, professional, often serious and sometimes a little silly. He’s Ray Cortopassi, Fox 59’s morning and afternoon anchor. Cortopassi certainly served up silly when we arrived at the state of the art Tribune Broadcasting station that’s been his home since 2009.

Cortopassi brought comedian Piff the Magic Dragon from “America’s Got Talent” in front of the camera along with his dog Mr. Piffles. The humorous spot had those of us in the studio laughing and forgetting Cortopassi’s serious side.

“I’m the kind of guy who likes a good laugh,” says Cortopassi, “It’s really a joy to work here and have the chance to do that.” A broad smile sweeps across his face as he tells me about the fun in the newsroom the previous week. He says, “We all got to do a job switch. I got to be an assistant groundskeeper at Victory Field, Angela Ganote got to be a farmer and Jim O’Brien got to be a waiter at St. Elmo’s. At the end of the broadcast, everyone got to dress up as their favorite Austin Powers character.”

Seeing the lighthearted side is refreshing, since most of the time the news Cortopassi serves up is on the serious side. It’s stories like the one about how fellow Zionsville resident, Dennis Norris, fought to get a work visa for Hayat Nooristani, an Afghan translator who was fighting the war on America’s side. Norris fought through three denials from the U.S. State Department, got help from change.org and even got the help of petitions from a classroom in Lafayette who saw the story of Hayat’s plight. Finally, Norris got the visa approved and brought Nooristani home. For the role Cortopassi played in telling Hayat’s story and giving it the attention it needed, he says, “It’s rewarding when you get the chance to help someone.”

Though he’s written and told hundreds of thousands of news stories over his almost 25-year career in broadcast, Cortopassi easily recalls the most difficult one for him. He says the story of a father who lost his children in a fire was really difficult. “When the father spoke to me and said how important it is to live in the moment with your children, it was really hard. As a father, there was just a moment there when I couldn’t speak,” Cortopassi says.

Viewers know that breaking news or even certain guests require a certain element of ad-lib, which can sometimes mean a departure from the polish and pizzazz. Cortopassi says, “Sometimes you can’t win. In the end, you do your best, and you do what is best.” 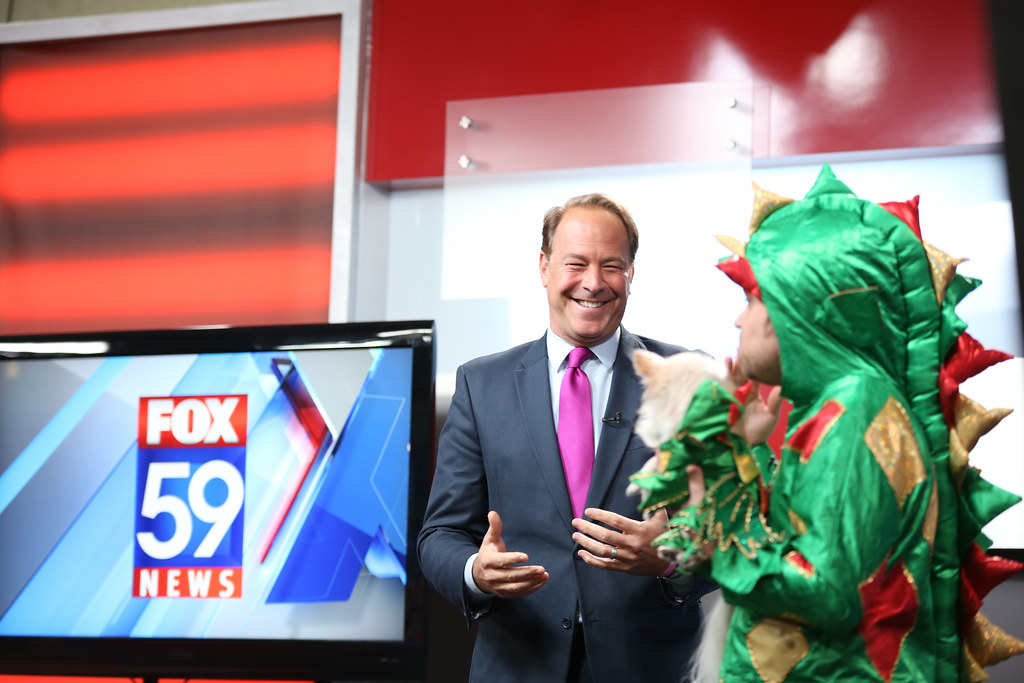 Before I even have the chance to sit down and really get to the heart of the behind-the-scenes scoop on this news icon, I wait for Cortopassi by his desk while he finishes discussing upcoming stories with colleagues. In just a few moments, I feel like I’ve already learned a lot about him. Aside from the family photos that hang in nearly everyone’s workspace, I immediately notice a worn Bible. Something tells me it’s been an anchor for this anchor. On the other side of his desk sits a box containing a collection of neatly folded pink ties. “Oh, that’s my collection of pink ties,” he says as he approaches. “I’m a pink tie guy. My mom lost her battle to breast cancer in 2007.”

As we move to a conference room to continue our discussion, he tells me how he got his start. Growing up in the suburban Chicago community of Dolton, Illinois, not far from colleague Brian Wilkes, he was raised with strong family values and a good work ethic. Cortopassi recalls how things changed dramatically when they lost his older brother in a swimming pool accident. Ray was just 6 at the time. The family remained tight, relying on a special person to get them through their grief. He says their priest at St. Jude’s Parish spent a lot of time comforting the family during that time and made a huge impression on young Ray. He says, “I wanted to be a priest.”

It wasn’t long before Cortopassi realized the priesthood wasn’t for him. As he got older, he still wasn’t sure what career path was the right fit for him. He decided to enroll in a community college and considered public relations but still couldn’t figure it out. That’s when he sought the help of guidance counselor, Dr. Mike Schnur. The counselor gave Cortopassi a test which revealed his strengths in English and composition. He suggested Cortopassi visit the local TV station WEBM, sit in the control room and observe. He says, “I saw the dynamic, and I was impressed with it. I saw how poised the anchors had to be with the timing. I knew then that I wanted to pursue journalism and TV. I’m grateful to Dr. Schnur for helping me find my passion. I still call him every few years to keep in touch.”

While at community college, Cortopassi filled his report card with shining straight A’s, finishing enough prerequisites to allow him to apply to Columbia University where he was accepted. It was there that he met his future wife, Leslie, who also earned a journalism degree.

As certain as Cortopassi was that he had a passion for broadcasting, the path was a rocky road. After graduation, he sent out at least 75 resumes along with a student film he’d created. He finally got one interview. But the man who interviewed Cortopassi turned him down. Cortopassi says, “He even said I didn’t have the right voice for a broadcaster.”

The road got rockier, and Cortopassi spent the next few years doing a laundry list of various jobs, even trying out for a play when he decided to pursue his interest in community theater. When he didn’t get the part, Leslie bought him acting lessons. He tried out for another play and got the part. After focusing on community theater for a while, Cortopassi decided it was time to pursue his dream in broadcasting.

Cortopassi’s news debut came in 1993 at the City News Desk in Chicago, the same year he and Leslie were married. City News Desk is the same bureau where Kurt Vonnegut worked. He says, “It was a great beginning. It was such a thrill to hear my news copy being read by a reporter.” After a year and a half, Leslie, ever Ray’s biggest cheerleader, suggested he take some time off and explore TV stations. So Cortopassi started calling, finally finding a news director in Traverse City, Michigan, who agreed to see him. He landed at WPBN Traverse City where he stayed two years. 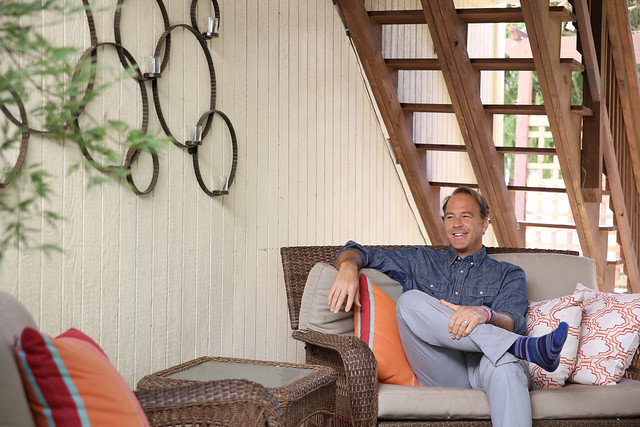 Again, upon the encouragement of Leslie, Cortopassi explored other stations. Gambling on spades, he took a job at KTNV Las Vegas. Vegas, baby! He stayed there three years and rolled the dice again. Luck be a lady because this time, it landed in Indy.

WRTV6 became his home next, and Ray and Leslie planted their family firmly in the growing community of Zionsville. Cortopassi eventually became the anchor for the evening news, and the rocky road seemed to smooth out until ratings wars in 2007 forced the news station to make sweeping changes, and he left the WRTV6 anchor desk.

Never a stranger to challenge, Cortopassi powered through freelance field reporting at WRTV6 and then at WTHR. To spice things up even more, the Zionsville Chamber of Commerce reached out to him and offered him a job. Juggling 30 hours of freelance reporting and working for the Chamber of Commerce really pushed his limits. Turning once again to his love of theater, Cortopassi and a friend co-founded the Zionsville Off-Main Street Players, a community theater he still manages and directs.

Cortopassi recalls, “I lost a lot of sleep during that time.” It was also during that time that he worked on a project with the Zionsville Economic Commission, helping them develop a new logo and a new marketing strategy. He says, “It helped me build a big network of partnerships that I still rely on even today. It made me understand why they chose me to help them. It’s been a tremendous gift. I owe a lot to the city of Zionsville.”

Although much was uncertain for the Cortopassis during that time, they were certain they did not want to uproot their family away from the city they’d grown to love so dearly. Ray continued his hectic schedule, Leslie became a Realtor and their kids continued growing up. As fate would have it, the news director at Tribune Broadcasting saw Ray in 2009 and offered him a spot anchoring the morning and afternoon news at Fox 59. He says, “I’m so grateful for this split shift. It’s allowed me to see my kids more often and spend time with my dad.” Cortopassi explains that he moved his father from Chicago in 2010 to their home when he began showing signs of Alzheimer’s. Ray and Leslie built an in-law style stand-alone addition behind their patio where his father stayed until his death in 2015.

Now life is once again much more smooth for the Cortopassis. When we arrive at his Zionsville home, not far from the heart of the downtown area, I notice how quaint and peaceful the property looks, completely the opposite of the rocky road Cortopassi has been through to get where he is. Jasper, their faithful, furry canine friend, greets us and ushers us through the home and through their memories of a home they moved into when their oldest son was just a year old.

Photos of the four children adorn the family room, and Cortopassi talks about his oldest son, Ryan, who just started at IU this fall. He says, “Ryan thought he’d like to study public policy, but now he thinks he might pursue journalism. He’d be a good storyteller. I don’t want to push him though. I’m curious to see where he’ll land.”

Cortopassi leads us out to a dreamy, expansive patio where he proudly reveals the fountain he’d just put in just a few days prior. As he points out the in-law quarters that he and Leslie added, he sits in a chair, looks toward the stairs and says, “Dad used to come down those stairs every morning, walk over to this chair and just sit. He loved it out here.” We wrap our session and Cortopassi reflects, “I really appreciate how life turned out.”

“Clue,” The Musical, at Mud Creek