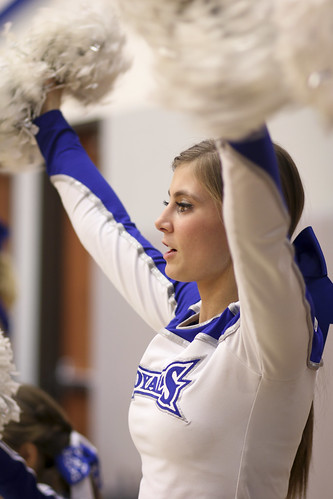 As a varsity cheerleader, junior Bailee Paul has experienced criticism since she first began her sport. Paul played varsity all three years of high school as she first started when she was 5 at Indiana Elite. From that point forward, Paul was hooked.

“I love my team and the sport,” said Paul. “It is something different that has many things that keep me cheering.”

Regardless of her progress, though, Paul still faced the common stereotype that cheerleading was not a sport. She conditioned at every practice with a minimum of 30 minutes per workout which included running and weightlifting. Still, people told her it was not a sport.

“We work as hard, if not harder, than the other sports,” said Paul. “We compete and practice, and we’re out there just as much time as they are doing the exact same stuff. Games can be very frustrating because we want [the boys] to win as much as they do, so it gets kind of frustrating sometimes. You are sweating, so you are getting a workout. It definitely equals out, and we should be treated the same way.”

In order to achieve equal respect, Paul made it a point to prove people wrong. She made presentations and wrote papers about the subject all in an attempt to educate people about her favorite sport. 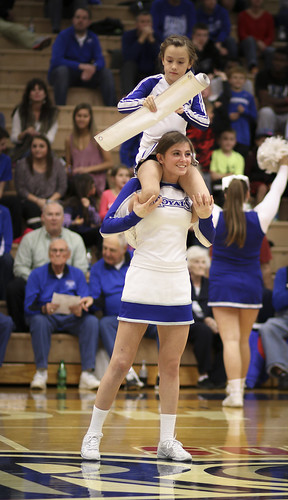 “I’ve had speeches and papers where I defend it. I mean, I just go back at it. It’s not [considered] a big deal, but I think it should be. I think a lot of people just think of it as waving poms and trying to look cute, but that’s not true. We stunt, tumble and jump while cheering throughout the whole game.”

When game time came around for the Royal cheerleaders, so did the stress. Perfecting the moves and mastering the steps took time, so messing up during a game was a fear for the girls.

“Sometimes when it’s something little, you just clap it out and get back on track,” said Paul. “For when it’s little mistakes, we try not to make it a big deal. But when something falls, we get really frustrated with ourselves, so we hit it over and over and over in practice, ­and sometimes we might have to condition for that.”

Regardless of the stereotypes, what keeps the girls cheering is their dedication to one another. They spend nearly 12 hours a week together, ­not including games on the weekends,­ and respect one another as teammates.

“We are basically like family,” said Paul. “We’re all so close, it’s what we do. It doesn’t matter to us what everyone else thinks. We do it because we love it, and we have so much fun.”