There are two new homeowners just off 47th Street in Lawrence, thanks to the efforts of the Greater Indy Habitat for Humanity.

For the first time in Indianapolis, one of the homes was built solely with female crews. Women from all walks of life worked together to fund and build the Habitat home for a Lawrence family in need. 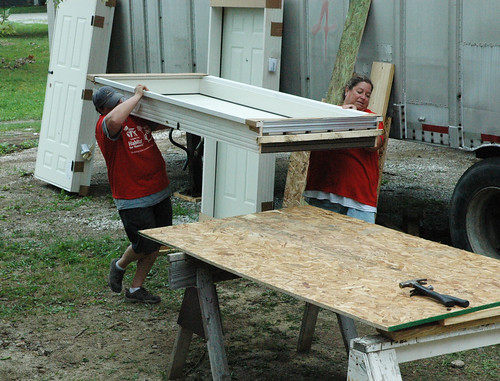 Female volunteers raised the funds and then, in just 21 days, raised the walls for the entire Women Build project.

“There’s something really special about having all these women come together,” said Andrea Brummett, president of The Pabulum Group and Team Leader for one of the build days. “What we can accomplish together as a group of women is amazing. It’s been efficient, pleasant and fun. We had a blast!”

Her team consisted of women from Anthem, Roche, Halo Salon, Allegiant, Freedom Mortgage and her own human resources management company. Each team of women was responsible for fundraising and events leading up to the actual build, as well as wielding the hammers and paintbrushes.

In fact, the funds were completely raised for the build far in advance of the deadline, thanks to the effort of more than 300 volunteers.

Habitat for Humanity is especially proud of the Women Build. It put the tools into women’s hands to fight poverty housing. Women make up 50 percent of Habitat for Humanity International’s volunteer force; yet often because of lack of training, they account for less than 15 percent of workers on the construction site. The Women Build program was established by Habitat to encourage the involvement of women in the construction of these homes.

Women crews have already built more than 1,500 Habitat for Humanity houses within the United States, and in dozens of other countries. The projects provide an environment in which women can feel comfortable learning skills they might not otherwise have the opportunity to learn.

It was especially meaningful to the home’s new owner, Breyona Brown that her home was built by women. Brown is a medical assistant at IU Health, and was thrilled to be chosen to help build her own home for her and her son Robert.

A Christian organization, Habitat operates under a simple mission:
“Seeking to put God’s love into action, Habitat for Humanity brings people together to build homes, communities and hope.” 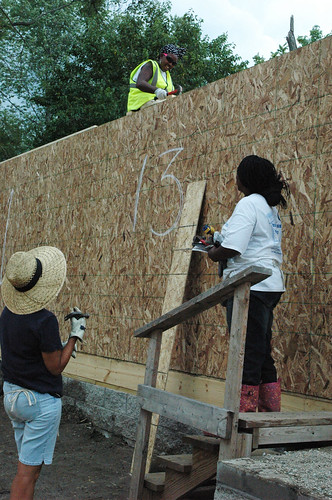 There is a second Habitat home just next door to Breyona’s, built by volunteers from 20 different United Methodist Churches in the Indy area. Deanna Johnson is the new owner and will live in the house with her daughter and granddaughter. Her plan is to leave the house to her daughter, Breanna, someday.

Both new owners participated in the building of their homes, volunteering 300 “sweat equity” hours as per the Habitat for Humanity agreement, including various “home ownership courses.”

The owners will officially receive their house keys and the homes will be dedicated in mid-October, dependent somewhat on the weather. At that point they assume a small monthly mortgage payment and move forward with their lives as new Lawrence homeowners.

Learn more about these and other Habitat homes at www.indyhabitat.org.