Other
Home›Other›HSE Girls Swimming: The Road to State

The HSE girls swimming team is the best that it has been in years. At least, that is what Coach Andy Pedersen says as the team heads into the 2015-16 season. And with multiple elite athletes leading the top-ranked team, this statement is heavily supported by an outstanding senior class, including Allie Barnes, Lauren Blanchard and Kylie Sutherlin.

All three seniors are state-ranked, incredibly competitive swimmers with over a decade of experience despite being in high school. Overcoming injuries and other obstacles to take titles and awards throughout their past seasons, the three girls plan to lead the team to the state podium. “This group of seniors is pretty amazing because they all exhibit different attributes that can help enhance our team,” said Pedersen. “Kylie is a primetime performer with a very business-like approach – she sets a tough and gritty example in a way her teammates can relate to. Lauren is very coachable and able to readily make adjustments during competition, plus she consistently does a really good job watching out for her teammates. Allie has top notch practice habits – she is always a leader at workout while also being an outstanding racer at big meets.”

Beginning at only 6 or 7 years old, the swimmers began to excel at the sport in local neighborhood teams.

“I played every sport known to man, and I started swimming when I was about 6,” said Blanchard. “I just swam for the neighborhood team until I was about 10. My dad used to swim, and he liked the sport and so did I. I just stuck with it.”

Now Blanchard is competing for the top spot on the team and the podium at state.

“I was out pretty much all of the season last year because of an injury but was still able to make it to Sectionals,” Blanchard said. “Even though I just got back, I placed third at Sectionals and 17th at State.”

But Blanchard was not the only one who overcame an injury. Senior Sutherlin has tackled injuries through her entire high school career, including a stress fracture, surgery and a concussion. 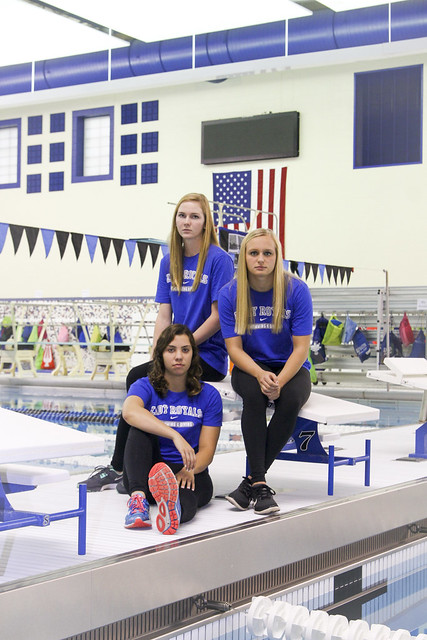 “My family has helped me so much throughout my swimming career, especially my brother who has been my biggest fan and number one supporter,” said Sutherlin. “I think that my favorite part of swimming is the family aspect of the team. We all support each other and are really close, so it is like having a second family.”

While competing for top spots in the state, the team also competes for top spots academically. While balancing 10 practices a week including practices before school starting at 5:30 a.m., the girls also take rigorous classes including honors and college level courses.

“Balancing school and swimming is definitely hard. In season, I have to work ahead when I can and utilize every free moment of the school day getting work done,” Barnes said. “I’ve learned to understand that in season, I have to sacrifice a lot to swim and get good grades, but it’s worth it.”

With all the time spent with each other at practices and meets, the girls have bonded to become more than just teammates.

Hoping to place top two in the state championship, the girls team is preparing for one of their best seasons yet. And they’re just getting started.

“This group of senior ladies has accomplished a great deal in their first three years with our program,” said Pedersen. “However, this year, their goal is to win a ring at the IHSAA State Championships, and in order to do that, they will need to top all previous efforts.”