Metropolitan School District of Lawrence Township (MSDLT) has earned an “A” rating from the Indiana Department of Education for 2013-14. The ratings are based on improvement of ISTEP scores, graduation rates, career readiness and other academic standards. This doesn’t give MSDLT schools more money, but it does allow for parents to compare schools. Private schools are not part of the state grading system.

Overall, Indiana saw an increase in performance. “I want to thank Indiana’s educators, administrators, parents, and most importantly, students for their countless hours of work over the last academic year,” Indiana Superintendent of Public Instruction Glenda Ritz said in a statement. “This data shows significantly increased performance for our schools, particularly in schools that have been lower performing in prior years. I want the thank the Indiana Department of Education’s Outreach Division for their efforts in working with our Focus and Priority Schools.”

Lawrence Township Superintendent Shawn Smith said he is proud of the township schools. “It is an honor to recognize and celebrate the hard work of the dedicated teaching staff in our district,” he said. “This letter grade is an accurate reflection of the quality of instruction and academic opportunities that exist in Lawrence Township.” A Lawrence Central High School senior was also making news on the education front. Symone Dulaney was selected to attend the Congress of Future Medical Leaders in Washington, DC last month. The Congress is an honors-only program for high school students who want to become physicians or go into medical research fields. The purpose of this event is to honor, inspire, motivate and direct the top students in the country who aspire to be physicians or medical scientists, to stay true to their dream and, after the event, to provide a path, plan and resources to help them reach their goal.

Symone was nominated by Dr. Connie Mariano, the Medical Director of the National Academy of Future Physicians and Medical Scientists to represent Indiana based on her academic achievement, leadership potential and determination to serve humanity in the field of medicine. “This is a crucial time in America when we need more doctors and medical scientists who are even better prepared for a future that is changing exponentially,” said Richard Rossi, executive director, National Academy of Future Physicians and Medical Scientists. “Focused, bright and determined students like Symone Dulaney are our future and she deserves all the mentoring and guidance we can give her.”

During the three-day Congress, Symone joined students from across the country to hear Nobel Laureates and National Medal of Science Winners talking about leading medical research. the group also was given advice from Ivy League and top medical school deans on what to expect in medical school, and learned about cutting-edge advances and the future in medicine and medical technology. The Academy offers free services and programs to students who want to be physicians or go into medical science.

Based in Washington, D.C., the Academy was chartered as a nonpartisan, taxpaying institution to help address this crisis by working to identify, encourage and mentor students who wish to devote their lives to the service of humanity as physicians, medical scientists, technologists, engineers and mathematicians.

A Lawrence pre-school has been cited for excellence in pre-K education. The Goddard School has been named as one of the state’s best early education centers. The school was awarded the National Association for the Education of Young Children accreditation. Only eight percent of early childhood education centers and preschools will receive this accreditation. “We’re proud to earn the mark of quality from NAEYC and be recognized for our commitment to reach the highest professional standards,” said Rosita Hittle, onsite owner of the Lawrence school. “NAEYC Accreditation demonstrates to our community that children in our program receive the best possible care and early learning experiences. Our management and faculty have earned this achievement by performing their very best every day.” 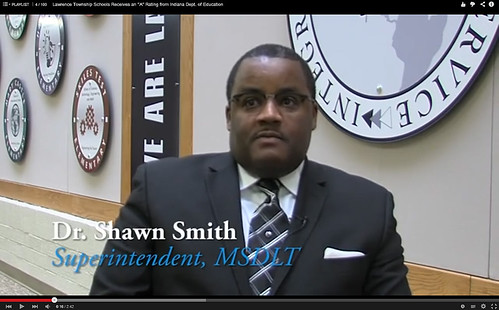 Dr. Shawn Smith, Superintendent of MSDLT, talking about how the schools were graded and how important they are to the district. Click to watch the interview.

The school had to go through an intensive evaluation process and have an on-site check by the NAEYC staff. The Goddard school will also be subject to unannounced visits from the staff for the next five years. “The new NAEYC Accreditation system raises the bar for preschools, childcare centers and other early childhood programs,” said Mark Ginsberg, executive director of NAEYC. “The Lawrence school’s NAEYC Accreditation is a sign they are a leader in a national effort to invest in high quality early childhood education, and to help give all children a better start.”

Conner Prairie by Candleight & So Much ...