You’ve seen the construction at 56th near Post Road. You might even have heard the building will hold a new Jockamo’s Upper Crust Pizza location. But there is so much more to the story.

A few years back Freddie Burris, Executive Director of the Fort Harrison Reuse Authority approached developers and longtime friends Scott Yeager of Yeager Properties and Scott Baldwin of Envoy, for help in drawing new businesses to the Lawrence area. They eventually drew up a plan that includes a public-private partnership, an emerging trend with municipalities and developers, allowing the developer to charge a lower rent.

“There has been so much great collaboration with this,” commented Burris. “This would never have happened if our board wasn’t as driven and creative as they are, to work out such a new partnership between the city, the Reuse Authority and the developers.”

Baldwin of Envoy said, “One of the most exciting opportunities for us and the community is the opportunity to blend business incubation with co-working, virtual office suites, and small office suites. Our goal is to provide our tenants with everything they need to conduct business, all at an affordable and flexible rate.”

The building will have approximately 11,000 square feet of retail space, half of which holds Jockamo Upper Crust Pizza. Another popular restaurant is yet to be announced. There are 100 individual office suites available for small and start-up businesses. The tenants will have their own suite as well as the use of four “smart” conference rooms in the building and other conference rooms around central Indiana, which can be scheduled using a web-based tool. The monthly rents (ranging from $395 to $695) include the use of the conference rooms, break-room, kitchenette, high speed internet, all utilities, reception, mailroom, and a wireless cafe where Lawrence’s own Brickhouse Coffee Roasters will be serving up freshly ground coffee products. 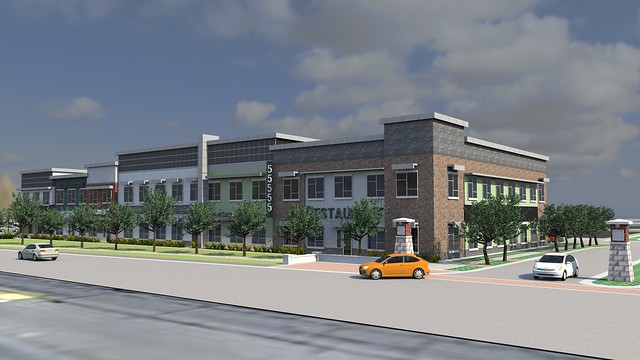 It is a formula that Yeager excels in, having other similar buildings in Carmel, Noblesville, Greenwood, Plainfield and Fishers plus another three in the Dallas area.

“We might not normally have chosen this location on our own,” mentioned Baldwin. “But the value was clear; we can drive costs down with the assistance of the city and Reuse Authority and it’s a good partnership that will help to bring more business into the area.”

Jockamo’s agrees. When the Reuse Authority approached owners Mick McGrath and Bob Stark 2 ½ years ago, they weren’t necessarily planning on expanding beyond their 2-restaurant existence. But the lure of the historic area as well as its walkability and cycle-ability drew the entire Jockamo team to meet with Burris. “They were the first guys to come see me on a Saturday,” chuckled Burris. “And Saturday is a big pizza-making day for them!”

“There is no one else like us in the area,” pointed out Stark. “Even in a down-economy pizza always sells.”

The partners eye the other building tenants, Ivy Tech, DFAS and other commerce in the area as obvious potential pizza-eaters, but their beer and wine license will also be a draw for evening meals. The restaurant will be much like the original in Irvington and the newer Greenwood location, seating 150 people plus outside seating. They also have a separate room seating up to 50 for meetings or parties. In the future delivery will be available, but not right at the beginning.

“We love to be very supportive of the community,” said McGrath. “We want to be part of Lawrence and will support local teams and raffles as much as we can, just like we do with our other locations.”
Jockamo’s and the rest of the building is scheduled to be open between mid-April and early May.

“Small business owners can grow here at a sustainable pace, then graduate into the Lawrence community where they will eventually need more traditional office, industrial, and retail spaces. To top all of that off, they will be able to get a great pizza after work at Jockamo’s!” said Baldwin.