Other
Home›Other›Striking a New Chord: Why Lawrence Bands Are Marching to the Beat of a Different Drummer

Striking a New Chord: Why Lawrence Bands Are Marching to the Beat of a Different Drummer 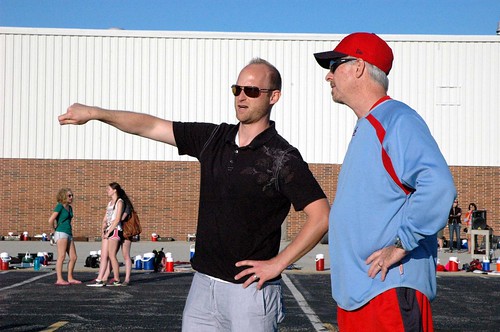 Anyone who was in a high school band or is a band parent knows the passion that engulfs this most American of musical and social traditions. Halftime band routines at Friday night football games are right up there with hot dogs and apple pie in defining Americana. Who doesn’t love it when the band strikes up the old school fight song? Parades and performance contests are a band’s lifeblood, where these heel-to-toe marchers tote tubas to piccolos while stepping off intricate choreography—all while keeping a straight line (mostly). And, there’s the not-so-small matter of competition with the high school across town—you know, the “our drum line is better than your drum line” stuff. Passion? Oh my, yes!

But, there’s a lot more going on than just trombones and touchdowns. Marching band creates life-lesson opportunities for kids—through military-like discipline and an enormous time commitment in the pursuit of musical (and personal) excellence. It costs money for kids to participate in marching band—a lot of money that many Lawrence Township families can’t afford. At the same time, financial pressures continue at the district level. Thus, with an eye toward controlling costs, Lawrence North and Lawrence Central band directors Tom Wallis and Randy Greenwell pitched the administration on the idea of combining the two bands for marching season. After months of planning, including numerous meetings with band parents and students to sell the idea, it became reality. “Everybody has worked hard to make this happen, and it was important that it happen at the grassroots level,” says LC band director Greenwell. 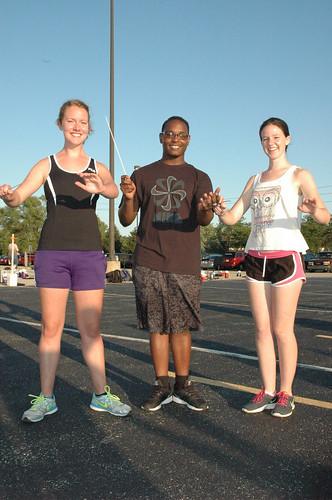 This football season, the combined units—now called the Pride of Lawrence Township—will step off together. The Pride will perform at senior night and homecoming at each high school, and at the Lawrence Central-Lawrence North football game. Also, they’ll strut at the LC vs. Avon game at Lucas Oil Stadium, where the Pride will perform in Music For All’s Grand Nationals championship. They already have at least one performance under their band tunics, having marched in the Lawrence July 4th parade. “It has worked out really well,” says Tom Wallis, LN band director. “It’s a chance for students to be with kids they went to elementary school with again. Also, bonding with other students and teachers, and increased opportunities to perform and travel.” Under consideration are possible trips for Pride to play in Bowl game parades, the Macy’s Thanksgiving Day parade, perhaps even Ireland’s St. Patrick’s Day parade.

An agenda for one of those informational meetings spelled out the challenges facing administrators in pursuing the combined band idea. It included language such as “this is not about one school absorbing another” and “this is not about stealing kids or taking away from each school’s core program.” To their credit, Greenwell and Wallis, joined by student and parent leaders, took great pains to make it a smooth transition. Not surprisingly, the more challenging group to deal with was the parents. “The kids have been excited; parents are getting excited,” Wallis says. “The parents have had more of a challenge with change from doing it [band] a specific way.” 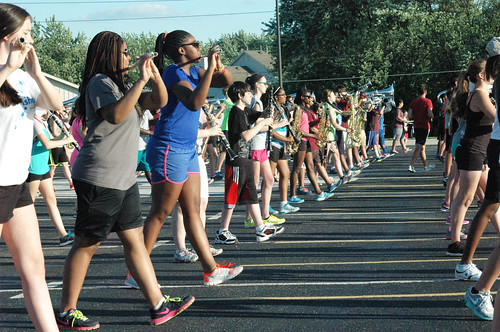 One way of addressing this was to combine some traditions from each band. A neutral uniform will be used with highlight colors from both schools: maroon and green. “Both schools have had to get together and compromise,” explains Wallis. “In the end, the parents knew we were doing it for the kids. They’ve done a really good job with it. No detrimental drama, or holding back.” Before, each band had about 130 members. The new Pride sports 250 marchers. Students will remain at their home schools for all other music activities. Bus transportation is being arranged to ferry students to LC, where after-school rehearsals will be held. Summer rehearsals were held at LN. One important function apparently will not change: each school’s band booster organization will remain, including its fundraising activities.

Keeping band affordable is one of two primary reasons for the move. Marching band expenses at Lawrence Central are about $800 annually per student; $400 a year at Lawrence North, where the contest schedule has been less aggressive. Greenwell says the merger will help keep costs under control by pooling resources. “We’re working hard to hold the line on costs. This will allow more kids to participate,” Greenwell emphasizes. The other factor is MSDLT’s expansion of its Pathways educational model. With Pathways, student and district strengths are key. Essentially, students remain with the same core of teachers throughout high school. Pathways also provides for customizing student curricula. 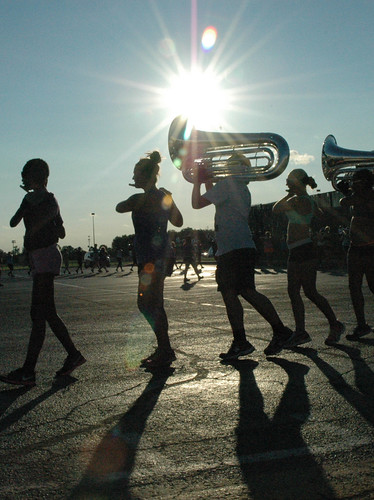 Wallis likes the idea of educational consistency for students. “I think it’s great for students who struggle with having to build new relationships all the time with new teachers. From an educational perspective, it’s fantastic.” Greenwell says it was a natural that music be an early adopter of Pathways. “Lawrence already had a strong performing arts program at both schools, and this move allows us to build on those strengths,” Greenwell explains. “It’s also good for the directors. We learn from each other, and enjoy teaching students we wouldn’t otherwise see.”

Band equals passion—that’s an empirical fact. Yet, through good planning and communication, Lawrence administrators and the band parents recognized what Wallis and Greenwell had been saying all along: this is about what’s best for the kids. No less an authority than renowned band composer and director John Phillip Sousa once said, “I have always believed that 98 percent of a student’s progress is due to his own efforts, and two percent to his teacher.” Sometimes, however, teacher knows best. “Innovation is needed; it’s key,” says Wallis.