Center Grove High School is a learning and growing environment for 2,447 students with over 70 different clubs, over 15 sports and hundreds of classes. The school also has Alternative Academy, Central Nine and Early College options. It is a large spectrum of people and activities, and for the Publications class, it is both a challenge and an experience to cover it all.

“It definitely gets crazy sometimes,” managing editor Hayley Griffith said. “There is a lot going on at once because everyone has a different job, but it has that sense of organization where everyone knows what they’re doing, so we are able to go out and cover most of the students and do the best we can to get everyone involved.”

As opposed to a newspaper or a yearbook staff, the Publications staff creates a yearbook, a yearbook supplement, four news magazines, daily broadcast productions and frequent website and Twitter posts each year.

“Center Grove has the only totally converged newsroom in a high school in the state that we’re aware of,” said teacher Casey Tedrow. “We did that because we realized from our alumni that [a converged newsroom] was the experience students needed [in preparation for the skills needed in college].”

Two teachers, Tedrow and Melissa Warner, are in charge of the class. They and various student editors help make sure the school gets adequately covered, and the work gets done according to AP Style.

“Our job changes as the year goes on,” Warner said. “Early in the year, we are teaching. We’re going over skills that students are going to need to be successful journalists. But then as the year goes on, we’re hoping that the leadership training that we’ve done with editors removes us from the equation of teaching, and now we’re more advising.” 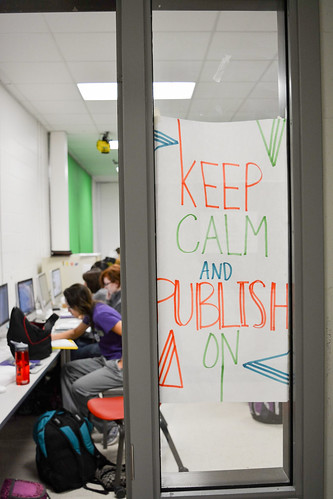 CGHS IN PRINT
Almost every person on staff works on the yearbook at some point, and the finished product gets sent to Jostens, ideally before spring break. The yearbook supplement is then made for the spring sports, clubs and events that cannot be covered in the original yearbook.

“The yearbook is supposed to tell the story of what Center Grove did that year,” co-yearbook editor Kara Nussbaum said. “It’ll go over what the show choir does and all of the show choirs have a page; what sports teams do, like football state champions was a really big thing this year. It goes over all of the clubs, like NHS or Riley Club.”

News magazines are produced for a different kind of coverage than the yearbook.

“Every news magazine has sports cards; we do different athletes from different sports, and we usually do the ones who aren’t very well-known,” news magazine editor Chloe Tyson said. “Then we try to [write stories about] someone who is super unique and [does not participate in many school activities], but they have a super cool talent or something you could never know.”

Photography editors are in charge of making sure that all the necessary pictures for covering the yearbook and news magazine are taken and are good enough to use.

“Most of the pictures I take and help sort are used for all sorts of different things, such as sporting events, musicals, art, clubs, school-provided events and special features on students,” co-photography editor Amanda Ward said.

ONLINE PRESENCE
Students make two- to four-minute video features for each CGTV news broadcast. These features can be much more current than either the yearbook or news magazine.

“I try to put on stories that are good news. Like, they incorporate the news that’s going on around Center Grove, but also we like to do features about students,” co-CGTV editor Sierra Bansemer said. “Then we also do features that are just fun. [Once] we did a ‘pre-dance’ [feature] for Homecoming that was kind of goofy.”

The Publications website, centergrovepublications.com, ideally posts new stories every day. When a story comes at random, the website is usually where it is posted.

“The website is little tidbits of fun, sometimes hard-hitting, stuff that just doesn’t really fit anywhere else,” co-website editor Bailee Leathers said. “We are kind of a ‘catchall’ for anything that someone wants to write. We pride ourselves in being a media that can post whatever we want; we try to be open [to any stories that the class comes up with].”
There are two Twitter sites, @cg_sports and @cg_publications, and an Instagram, @cg_publications.

“We are in charge of tweeting and assigning people to tweet the main athletics for the week [on the sports Twitter],” co-sports editor Maddie Weeks said.

MORE THAN JUST A CLASS
Journalists are not the only ones in the class either. There are two business editors who manage all the money and collaborate with the businesses who are buying ads to fund the publications.

Skills learned in the class about deadlines and working with people often stretch beyond completing work in high school or even college, and many graduates, from journalists to doctors to actuaries, have found practical applications in the workplace.

Are You Ready to SPArty?

Claybridge Farm & Riding Academy: Back in ...