Happy Anniversary, Greenwood Freedom Festival! You are 30 years old this summer. Who knew from your grassroots beginning in 1985 that you would become a region-wide event that draws more than 50,000 avid fans from multiple counties?

SIMPLE BEGINNINGS
Originally begun by then-Mayor Jeanette Surina to be a time to gather the fast-growing Greenwood community to honor our nation’s birthday, and to acquaint longtime residents with newly arrived neighbors, the festival has taken on a life of its own.

In the early years, the hometown parade started the festivities in the morning followed by the street fair until midday. A few hours later, crowds would gather in Craig Park, lawn chairs and picnic baskets in tow to wait for the patriotic program followed by brilliant fireworks. 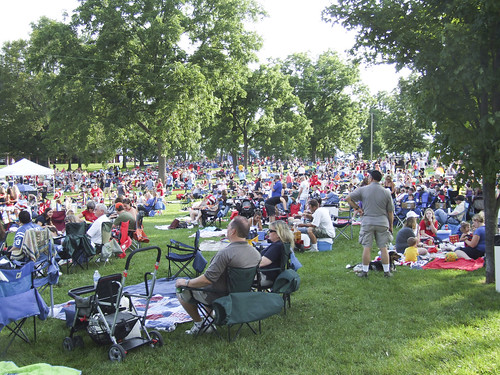 Ed Ferguson, Director of Planning for Greenwood since 1980, remembers the early days when it was exciting to have 6,000 people come together in Craig Park for the evening. The year the attendance hit 10,000 was a celebrated milestone.

About 6:00 p.m. the fire department always brought a bucket truck to entertain those hardy citizens who wanted a free ride up to that lofty height. Food vendor booths (simple tables, then) opened prior to the patriotic concert and fireworks. Ferguson coached his oldest son’s AAU basketball team in the eighties, and the team parents had a food booth with a selection of cookies, cake slices and fresh fruit cobbler that was wildly popular. Ferguson’s wife Barb would bake from scratch black raspberry cobbler in commercial-size pans. Memories of that delectable treat topped with creamy vanilla ice cream slowly slipping off the side still cause those who tasted of the fruits of her labor to salivate.

“The first two years we were the only one doing a dessert booth,” remembers Ferguson. “Others had hot dogs and BBQ, but the top spots for the crowd were the fire department’s corn on the cob with the butter dripping off of it and the AAU dessert table.” 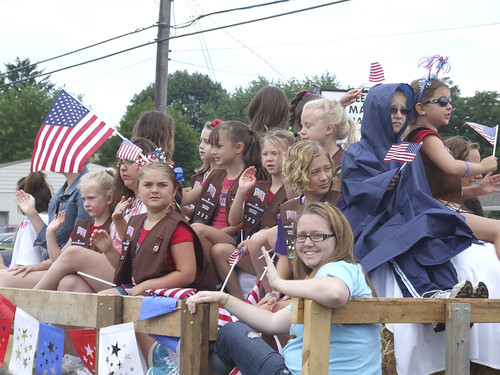 traditionally began on Meridian Street by the Greenwood Public Library. This year it marches from Madison Avenue by Greenwood Middle School through downtown into near neighborhoods along Broadway and then circles south along Meridian Street to the back of the middle school. Every street is lined with people, many bringing chairs as they wait for the show to pass by. Kids eagerly hope that candy will be thrown to them from passing floats. Hopes fulfilled, they swarm the street briefly like bees retrieving nectar. 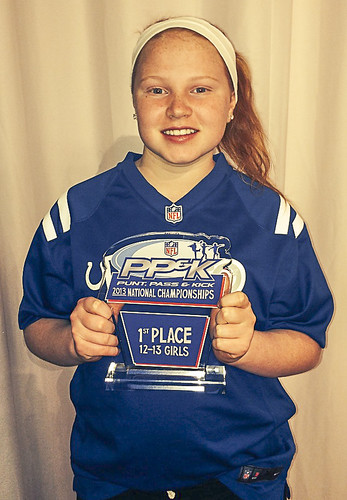 And never forget the parade marshal. This year welcomes Sophia Saucerman, who won first place for her age group in the annual NFL Pass, Punt and Kick competition. The national finals were held in Denver this year; Sophia was up against the other three top finalists for her 12-13 age group. All finalists are culled from the state competitions held in each of the 32 NFL cities, with only the top four finalists in each of the five age groups for girls and for boys. A soccer player since age five and now a goalie for the elite FC Pride (fcpride.org), Sophia won the sectionals in Greenwood before tackling the state competition at the Colts training facility last winter.

Ironically, Sophia won fourth place nationally last year in Atlanta but did not qualify for the nationals this year. She came in fifth at state. But in early January, the NFL called her father, Gus, and said there was an opening. Would Sophia like to compete? Her shocked reply was, “Duh, Dad!” Of course! The whole family, including mother Pam and younger sister Sierra traveled to Denver on the NFL’s dime. Thus, a seventh grader, exemplifying the Greenwood civic willingness to take on challenge, is the 2014 Freedom Festival parade marshal. The parade starts at 10:00 a.m.

NEW FESTIVAL HAPPENINGS
The Festival is launching new Festival features this year. A children’s entertainment stage has been added for the morning in Craig Park near the gazebo across from the Little League fields.

Full details are at greenwood.in.gov. Bring your lawn chairs and come build your own 21st Century Freedom Festival memories.