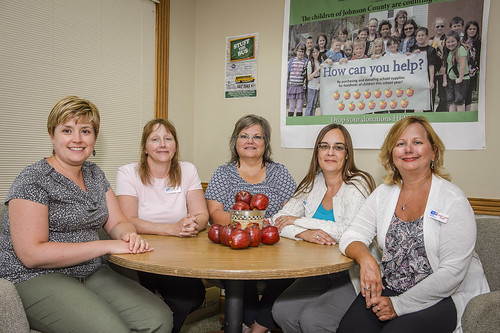 While many Johnson County residents have settled into 2014, the United Way of Johnson County (UWJC) is ramping up its efforts. Kicking off its Annual Campaign fundraiser and sending local students off to school with much-needed school supplies is just the beginning of its new year and new goals.

With 19 agencies and six programs serving the Johnson County area, the UWJC will announce its Annual Campaign goal for 2014 on August 21 during its kickoff breakfast. Last year’s goal was $1,488,000. In addition, serving a demographic from infant to elderly individuals, Executive Director Nancy Plake said there isn’t anyone who can’t benefit from the services United Way Partners offer.

Its priorities also include finding employment opportunities for Johnson County residents, protecting children and adults from domestic violence, and connecting community members with an agency that meets their specific needs.

Building a Family Tradition
Johnson County resident April Nixon and her family are an example of the United Way’s reach. When Nixon’s mother gave birth, she was still a child herself. April said she and her own mother grew up together. When April was 7 years old, her mother signed her up for Big Brothers Big Sisters of Central Indiana, an organization that carefully matches youth with young adults who serve as role models and “siblings” to participants. Nixon said her Big Sister Jane not only inspired her to attend college, but also remains an important part of her life today.

“Jane was there through hard times,” Nixon said of her youth. “If I wasn’t acting right, my mom would call Jane and she would talk to me.”

Now, as a mother of three, Nixon is proud to pass on the joy of being a “Little” brother or sister to her children. Even growing up in a home with an involved mother and father, the Nixon children were more than welcomed into the program.

“I thought the program was for single parents, but it’s really not,” Nixon said. “I think it’s something every child should have. I work a lot and my husband works a lot, so with multiple children, it’s very rare to get one child by myself.”

Nixon believes the individual attention her children get from their “Bigs” made all the difference. Her youngest son, Avery, struggled in school, but his Big Brother Josh was able to help Avery gain confidence and go from failing grades to reading above his grade level. She is also grateful that her 12- and 14-year-old daughters have wiser young women to confide in. In addition to doing makeovers, they spend time talking about tough decisions that the girls may not feel comfortable bringing up to their mother. Nixon prides herself in having healthy relationships with her children, but recognizes that some things are just easier to share with Bigs. The Bigs are part of the Nixon family and not only share outings and regular visits, but attend birthdays and family get-togethers.

Big Brothers Big Sisters of Central Indiana is one of 19 partner agencies of the UWJC. Others include Access Johnson County, Girl Scouts of Central Indiana, Boy Scouts Crossroads of America Council, The Social of Greenwood, Arthur R. Baxter YMCA, Gateway Services and the American Red Cross Johnson County Service Center. Each organization goes through a detailed allocation process to become a partner and receive funds from the UWJC Annual Campaign. Eighty percent of the money raised is distributed to the agencies and its six other UWJC programs. Twenty percent goes back into fundraising efforts and administrative costs.

Dividing up the Money
A board of volunteers reviews requests from agencies and then makes suggestions regarding how much a partner should receive. Decisions are based on how the agency goes beyond simply serving clients to addressing the needs of the community.

The organizations serve the community 365 days a year, whether it is the Baxter YMCA providing day camp for children while their parents are at work or Access Johnson County providing rides to seniors so they can attend doctors’ appointments.

“Donors have entrusted us with [their money],” Plake said. “We feel very fortunate. And we need to be accountable and use it in the best way possible.”

In addition to the work with its agencies, the United Way hosts community events to reach those in need. With a new school year quickly approaching, the UWJC will send more than 2,000 students to five area schools with new school supplies through its Fast Track program. The organization began collecting supplies in July, and rallied volunteers to pack and pass out backpacks before the start of the fall semester. In conjunction with the Annual Campaign kickoff, UWJC will also host its 18th Day of Caring. Local businesses allow employees to volunteer a workday at a local agency. Duties include painting, landscaping, cleaning and completing other needs for the non-profit organizations. In 2013, more than 300 volunteers served at 30 locations.

Beyond the Programs
Additionally, the organization offers a helpline to Johnson County residents in need of referrals for health and human services. As winter weather approaches, it will collect coats, hats and mittens for Operation Bundle Up, as well as toys and clothing for Christmas Angels. Families who are suffering with financial issues due to job loss or economic hardship can also turn to the Economic Assistance program, which is designed to help them manage what finances they have available and assist them in finding employment opportunities.

With only five employees at the UWJC, the organization relies heavily on volunteers. It has more than 200 volunteers who serve at events, help at the organization’s headquarters, offer marketing services, answer helpline calls, present fundraising opportunities to local businesses, and more.

Most importantly, the organization relies on donations. Ninety-seven percent of its funding is through donor pledges and contributions. A number of companies in Johnson County participate in the Company Campaign, which allows employees to deduct any amount from their paychecks before tax and donate to the United Way of Johnson County. Donations may be designated for a specific agency or to help the overall mission of the United Way. It is currently working toward a grant offered by the Indiana Association of United Ways, funded by the Lilly Endowment. The Work2gether Grant will match up to $137,000 in donations from designated donor areas.

For more information about the United Way of Johnson County, volunteer opportunities or to donate to the Annual Campaign, visit uwjc.org.