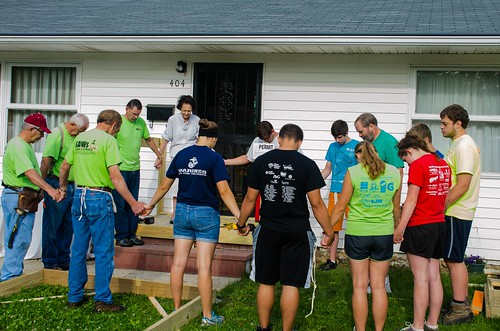 As you approach a barn located just southwest of downtown Bargersville, you often will hear the high-pitched whine of power saws, the purr of electric drills and the ring of hammer striking nail. You will also likely hear the cheerful banter of people working hard at a labor of love and compassion for their fellow man. These are the sounds of the Johnson County chapter of Servants at Work (SAWs), a mission-oriented organization aimed at liberating people confined to their homes due to disabilities.

SAWs is non-profit and all-volunteer ministry. The mission of this ecumenical ministry is “providing the handicapped, the elderly and infirm individuals with access to their world and to allow them to remain in their homes.” They accomplish this through delivering wheelchair ramp systems at no cost. Volunteers and donations allow SAWs to provide accessibility solutions that would have been unaffordable otherwise.

The United Link
The Johnson County chapter is the outgrowth of a need encountered by Terry Doty, a member of First Christian Church of Bargersville, during the United Way Day of Caring flood relief work in 2010. A ramp was needed for a young boy with muscular dystrophy in Greenwood. Unfortunately, the United Way lacked the needed resources at that time, and workers were unavailable. The Muscular Dystrophy Foundation connected Terry to leadership of the Marion County SAWs chapter, and after discussion, they agreed to provide materials and two leaders for the project if Terry could come up with the remaining workers. Terry found 20 volunteers from his own church along with Mount Olive Lutheran Church, Bluff Creek Christian Church and Saints Francis & Clare Catholic Church, and with that arrangement the project was completed.

More importantly, the fire of passion for this ministry had been stoked in Terry, who in turn passed it on to men in his church and others nearby. Terry met with men from these churches, describing the ministry, and in 2011, with some guidance from the Marion County group, the Johnson County SAWs was chartered as an official entity.

While Terry Doty is the Johnson County chapter coordinator, he is quick to point out that an organization like this will not survive without a lot of leadership and helping hands. Building a volunteer base and developing additional leadership are critical activities to ensuring a sustainable endeavor. Therefore, Terry and his fellow leader Mike Squier have gone about doing just that. As of July 1 of 2013, the group had utilized 2,112 volunteer hours provided by nearly 300 volunteers, and both of those numbers have grown in the past 12 months.

A core group of 16 SAWs volunteers, recognized by their neon green T-shirts, has emerged. They provide the lion’s share of the pre-build activity as well as leadership on the build sites. All told, the JC SAWs have built 42 ramps to date, with more than 1,000 feet of ramp footage to their credit. That takes a lot of helping hands and leadership!

Not Just Any Ramp
The ramps use a unique design that does not require the use of post and concrete construction. Support structures referred to as “U-ez” support the ramp beams and decking without excavation of postholes but still maintaining stability. This method allows the ramps to be constructed in a modular fashion with components built centrally at the donated construction barn near Bargersville. Components are then transported using a donated trailer to the installation site where a team of volunteers, usually a group from a Johnson County church or organization, install the components according to the design for that specific residence under the guidance of trained SAWs volunteer leaders. Another benefit of this modular design is many components can be reused on other projects, if a ramp becomes unneeded for any reason.

This pre-build and install method allows volunteers to work on aspects of the project that match their skill levels, physical capabilities and time availability, all important aspects of a successful volunteer effort. Mike Squier points out that “all skill levels are welcome” on any project.

At one build activity at a small bungalow in Greenwood, four green T-shirted SAWs leaders provided guidance to the installation volunteers. Volunteer workers that day were eight youth and one adult leader from Spectrum Youth Ministry. The Spectrum youth actually are a return group of volunteers, having worked on pre-build activity at the construction barn in 2013.

Activities ranged from setting the “U-ez” for support and installing the ramp beams to pre-drilling the ramp planks, installing planks and sanding handrails among other tasks. The mantra of “all skill levels are welcome” was evident that day.

A Place for Everyone
Backgrounds of the core volunteers are varied, including an individual currently employed in construction activities, a retired insurance agent and a retired biologist, to name a few. However, these men all seem to have one thing in common: a passion for helping people and for this ministry. When asked how he became so passionate about this work, Mike Squier responded, “If you know Terry, you know he can get pretty excited about it, and that’s contagious.” Terry, though, is adamant that each of these men has the passion and he only facilitates.

Fred Chadwell, another key volunteer may have summed it up nicely when he said, “This is just a great ministry and I really think you see the benefit and the joy that it brings to people that are handicapped and now they are able to get out of their homes. It just is a good feeling when you see that.”

Therefore, it seems that the SAWs ministry not only provides benefit to those in need of additional accessibility, but also adds some intangible benefits to all those volunteers who give of their time, talent, money and energy to make this ministry a reality.