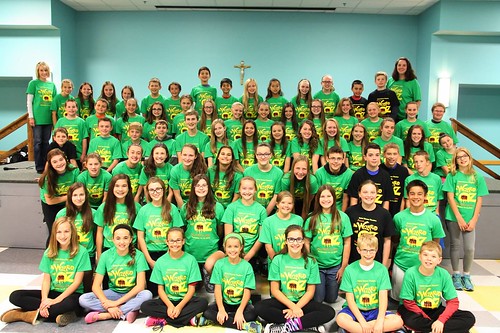 Lions and Tigers and Bears, OH MY!

You’ll find those and more on stage at St. Simon Theater’s production of The Wizard of Oz. This year’s show, St. Simon Theater’s third annual production, showcases some of the school’s brightest and freshest talent. Led by co-directors Suzanne Collins and Marla Smith-Clapacs, the show is much more than just another presentation of a classic musical. It’s 90 minutes of spectacular performances from the most unforgettable junior Broadway performers on stage.

Bedazzled in authentic, custom costumes, this year’s cast will own the stage, a stage that will be adorned with magnificent, lifelike props conceived of by a handful of parent leaders and built by the hands of the performers’ moms and dads. There is no doubt these kids will sing and dance their way into your hearts in The Wizard of Oz.

I took my backstage pass and sat down with Collins and Smith-Clapacs in the Emerald City to get a glimpse of The Wizard of Oz.

Collins opens by sharing her thoughts about this year’s show.

“I’m excited about The Wizard of Oz, because this is the first time we’ve done a copyrighted show,” said Collins.

She explains how the previous shows put on by St. Simon Theater were a “review” format, a musical featuring excerpts from various musicals. Collins wrote the scripts for both previous shows.

“That format worked well since the performers were rookies,” said Collins. “Now that they have a few years under their belts, we’re able to look at their skills and find a part for them to shine.”

No matter what role or level of experience a performer has, Collins has one mission for the children in this year’s show.

“Encourage one another and build each other up,” she said.

She explains it’s from a Bible verse in the Book of Thessalonians, and it’s one she wants to resonate with the children throughout the process.

“It’s a great guiding principle,” Collins said. “During tryouts, there’s competition for the roles. So after tryouts, some are happy, some are sad. But once in the show, the competition goes away. Because during a performance, you’re in the spotlight, and you need that encouragement.”

Smith-Clapacs has a guiding principle of her own.

“Music lifts the soul … Being a part of music makes the soul soar. It’s the element that adds richness to a theater performance,” she said.

A veteran stage performer who’s been in the spotlight since the age of four, Collins never had difficulty with self-confidence, and her passion for performing on stage has never extinguished. Growing up in Brooklyn with easy access to Broadway, Collins was immersed in theater and the arts.

“My first show was a dance recital where I performed Tiptoe Through the Tulips,” said Collins. “At that moment, I knew I wanted to be on stage. Like my dad, I was athletic, I loved swimming and I had a competitive spirit. But it was my passion for performing that was strongest. My parents recognized it in me and let me explore it. They encouraged me every step of the way with lessons and taking me to shows.”

Another of Collins’ passions has been the art of public speaking. During her tenure at Miami of Ohio in the communications department, she trained her students to feel confident and in control in front of an audience.

“Whether it’s performing or public speaking, it’s all about the applause and approval. It’s a self-esteem building block,” said Collins.

With a gift for performing and public speaking in one pocket and a passion to share it in the other, Collins waited for the opportunity to make her dream a reality. Her dream came to fruition when she started St. Simon Theater just three years ago. She approached the presiding principal about organizing the first show.

“It all just clicked,” said Collins. “He was all for it. He was very fond of the arts as is our new principal, so he gave me the green light to get it off the ground.”

That’s when Smith-Clapacs became involved. With a strong musical background of her own and a shared passion for performing, Smith-Clapacs approached Collins asking her to let her help out and be a part of it. From then on, the two became ultimate co-stars.

“Marla amazed me when she offered to help,” said Collins. “I don’t know what I would do without her.”

“I am amazed by Suzanne Collins,” said Smith-Clapacs. “Her creative mind and ability to translate her thoughts and vision onto the stage is simply incredible. But even beyond her creativity, I am amazed by her dedication to the educational experience for our young performers. She is so committed to helping each and every performer grow throughout the experience.”

Like Collins, Smith-Clapacs found her love for performing as a child.

“I was very fortunate as a young child to have parents who valued music and theater and planted a seed that grew into a love for the performing arts,” said Smith-Clapacs. “I loved being a part of the theater and having an opportunity to express myself in new and different ways. I began taking violin lessons when I was 3 years old and piano lessons when I was 7. My affection for musical theater bloomed from backyard performances beginning when I was 9 years old.”

She adds that her favorite role of all time was that of Peter Pan, a role her daughter Caroline reprised in last year’s show.

From the beginning, Collins’ and Smith-Clapacs’ vision for St. Simon Theater has always been to educate the children and expose them to the arts and the environment of theater. They call it “Educational Theater.”

“Suzanne and I are unified in our desire to provide an educational musical theater experience for our students that goes beyond scripts and music notes, to building their confidence and assisting them in recognizing that they are their own beautiful works of art,” said Smith-Clapacs.

And Collins added that the younger children start, the better.

“Not everyone is bound to be a Broadway star,” said Collins. “You can’t start at age 15 and expect to master it right away. You have to start young. I want them to have these skills because once they learn those skills, they’ll stay with them forever.”

Collins is definitely starting these young performers early. To many of them, it may seem like a lot of long hours spent perfecting and polishing. But to Collins, it’s not just about that.

“When we prepare for a show, we rehearse adequately,” said Collins. “Of course I want them to do a good job. But it’s important to me to help them build their self-confidence. When you’re confident, that’s when you shine.”

Watching the kids work their magic on stage isn’t the only amazing thing that’s happened throughout this process. Collins says witnessing transformations happen has been incredible, like when a shy child comes out of her shell on stage. She recalls one performer who auditioned for the first show.

“She was terrified, but she did a lovely job,” she said. “After it was over, she broke down and cried because of her nerves. We gave her a solo that year, and she was floored. This year, she’s got one of the lead roles in the show.”

She gets emotional and tears up as she tells me another story, this one about a time when a mom came approached her to talk about her son’s performance.

“The mom came up to me and said she’d never seen her child like this, that she’d lived with him his whole life and never knew he had it in him,” said Collins. “That’s what it’s all about.”

Smith-Clapacs smiles broadly as she tells me about the performer that stood out to her.

“A young girl told us she auditioned because she’d seen the smiles on the faces of the performers both on and off the stage for the past two years and she wants that smile,” said Smith-Clapacs. “Her statement captured in words the true joy that these students feel being part of this collaborative effort. The joy is contagious and freely shared!”

As if the magic from the kids and the transformations haven’t been fulfilling enough, there’s another element that’s brought unexpected joys far beyond what the two imagined.

“So many parents have just jumped right in, pitched in to help, latched on to the dream and taken it farther than I ever dreamed,” said Collins. “It’s humbling.” 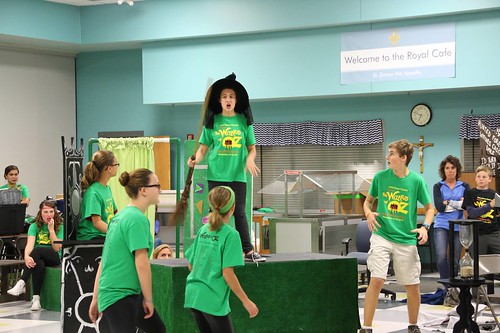 The journey down the yellow brick road has surely been a long one for these junior performers, the co-directors and parents alike. While the time will come to breathe a collective sigh of relief when the curtain closes, Collins and Smith-Clapacs are already energized for the next show.

“We work on the shows two years out,” said Collins. “So we’re already making plans for next year’s show.”

Considering the number of performers who participate in St. Simon Theater has increased each year, they should have no problem putting together the next show.

“I feel like we’re getting to the point where it’s getting kinda cool to be a theater nerd,” said Collins.

Smith-Clapacs has another theory about the popularity of St. Simon Theater.

“The students find unity on stage through singing, dancing and acting, and that unity brings an unparalleled sense of camaraderie and joy,” said Smith-Clapacs.

As my time in the Emerald City draws to a close, I’m left more excited than ever for the show to start. You’ll find me backstage, but you can get your tickets now.

Eddie Mode Reflects on a Lifetime of ...