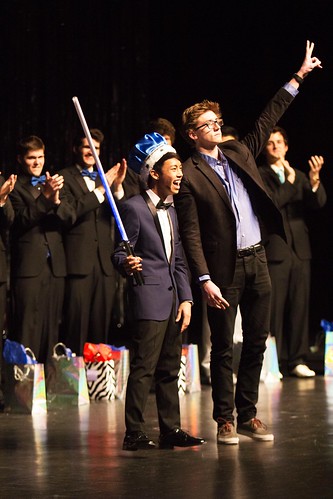 This mock talent show promises to be highly entertaining, with this year’s theme of “#TBT, Throw Back Thursday,” which gives a nod to the icons of the ’90s.

Senior Chad Davis, VP of NHS, is chair of the production committee for Mr. Royal. The student committees organize ticket sales, solicit donations, design the program, and help handle all details the day of the event to ensure a seamless production. There is a lot that goes on backstage and behind the scenes, much like a play or musical.

“Most fundraisers require someone to purchase a good or service or donate to a cause, but Mr. Royal gives people to opportunity to gain something from their donation,” says Davis. “I love how year after year people say it is one of the most hysterical, comedic events they have ever seen.”

Typically, a dozen senior men sign up to participate. This year set a new record with 18 contestants. Each contestant will choose a ’90s icon to impersonate. There will also be talent portion and an interview portion. The funds raised by this event sponsor 40 families in the HSE district for Christmas, as well as pay for events during Teacher Appreciation week.

Teachers and sponsors Jill McGrath and Amy Shipley are excited for the competition. “It is so much fun!” says McGrath, “And it’s not just the drama kids who compete, these seniors are full of surprises.”

Besides the title of Mr. Royal, there are other titles to be won such as Mr. Talent, Mr. Dance, Mr. Entertainment, and Mr. ’90s. Competition is tight and the level of entertainment high.

And it is not just seniors competing. Emcees for the evening are seniors Hannah Conrad, Jessica Paris and Maddie Maloof.

McGrath recommends buying your tickets for Mr. Royal early. “The event was close to being a sell-out last year, filling all but 50 seats in the Leonard Auditorium, so get your tickets soon!”