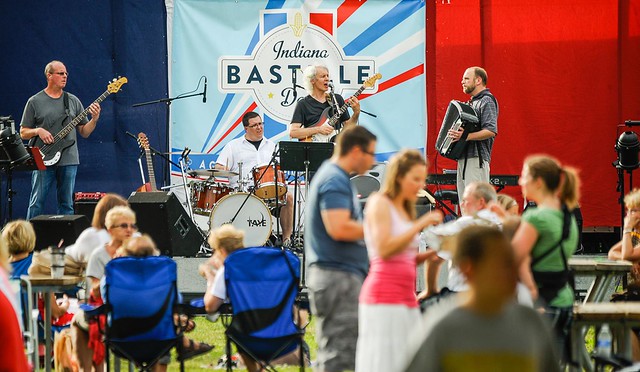 On Saturday July 11, the sixth annual Indiana Bastille Day will be celebrated at Landmark Park in Fortville from 11 a.m.- 11 p.m. Bastille Day, also known as French National Day, celebrates the beginning of the French Revolution in 1789.

“Back in 2009, my husband and I were living in Fortville. After the Fourth of July fireworks, I felt a bit homesick and wanted our young children to enjoy the French National Day festivities without having to fly over to Paris. My husband and I organized a last minute Bastille Day celebration in our backyard and invited family members, friends and neighbors to join us. More than 50 enthusiastic people showed up in our tiny front lawn! Seeing how excited people were about a French event, we then approached the town about holding a larger event in the public Landmark Park,” said Gabrielle Hendryx-Park, co-founder of the event. “In July 2010, the first public “Indiana Bastille Day” festival was born with the help of Carol Ganz, Greg Mankey and the local Ten West Center for the Arts.”

The free family festival will have live music from authentic French band Frenchaxe as well as other singers and choirs. Vendors will feature artisan food, a beer, wine and cider garden and arts & crafts. A traditional pétanque tournament will take place along with a Waiter’s Race, a marionette show, a lantern parade and demonstrations from the fire and police departments. Costumed characters, some from the Fishers Renaissance Fair,will also roam the festival. A laser light show will end the night on a 30-foot screen. “The ‘raison d’être’ of the festival is to expand people’s cultural horizons and promote cultural diversity in an ever more interconnected world. To reach people, we have to find a way that they can personally relate to what’s presented to them. That’s why Indiana Bastille Day focuses on celebrating both French and Hoosier traditions,” said Hendryx-Parker. “In the next few years the festival will present more and more evidence of the rich history of the French culture in Indiana in an effort to help Hoosiers get in touch with their French roots.”