Geist
Home›Indiana›Geist›With Thanks from a Grateful Scouting Nation

With Thanks from a Grateful Scouting Nation 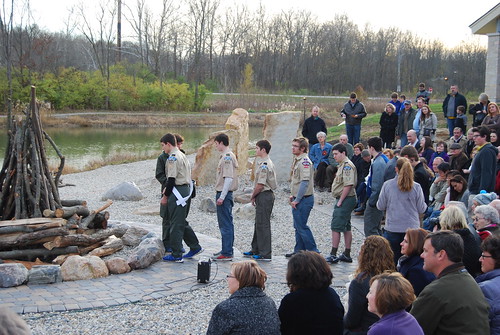 In a ceremony that took a year to plan, Boy Scout Troop 446 gathered Nov. 9 at the Golden-Burke Scout Center to dedicate the Angelo J. Peduto Memorial. The memorial honors their beloved Scoutmaster who passed away just a year ago. Nearly 200 guests gathered at the center for the event.

As I arrive for the ceremony, anxious to see the finished product, I peek through the doors to get a glimpse. Getting no satisfaction from the peek, I proceed through the doors and down the path to the campfire ring that will now be known as the Angelo J. Peduto Memorial. At the groundbreaking ceremony in May, Scoutmasters Dan Rench and Johnn Marlatt unveiled the plans for the grand structure. Their description, though mostly accurate, couldn’t prepare me for what I was about to see, nor did they come close to capturing the finished product.

When I see the finished memorial, I am struck by the tremendous amount of symbolism behind so many elements.

As promised, the campfire ring is the centerpiece. Enormous stepping stones lead the pathway toward the ring. The first stepping stone is in the shape of a heart, just like the one Angelo gave his wife, DeeDee, for their 10th wedding anniversary. The second stone, I learn later, is billion-year-old puddingstone which was formed during the Ice Age in Canada and came down to Indiana during the retreat of the Wisconsin Glacier about 14,000 years ago. The final stepping stone before the brick paver walkway is etched with the Boy Scout insignia. Across the bottom of it is part of the Boy Scout motto, “On My Honor.” 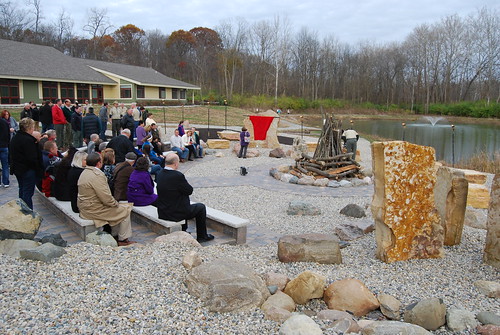 Twelve massive bench-shaped sandstone boulders surround the campfire ring, each representing one of the 12 character qualities each scout must embody according to the Boy Scout Law. They are trustworthy, loyal, helpful, friendly, courteous, kind, obedient, cheerful, thrifty, brave, clean, and reverent– all of which describe the way Peduto encouraged scouts to live their lives.

Just beyond the campfire ring is a gigantic boulder shrouded with a red Boy Scouts of America blanket. On the back of that boulder is etched the Boy Scout law. Directly across from that boulder and facing it are three matching large sandstone boulders that represent Peduto’s family, DeeDee, Gia and Adrian.

As the ceremony gets underway, it’s clear just as much effort went in to planning the celebration of Peduto’s memory. Emotions rise as those who loved him dearly recount the things he did to make scouting a better place, not just a hobby but a way of living.

Roger Pryor, former scouting father from Troop 446, explains why he flew in from North Carolina for the ceremony. He recalls a time when his son and a fellow scout were working to earn their Firecrafter ranking in summer camp, and Peduto took a week off work and away from his family to coach them.” If Angelo could do that for my son and his friend, this is the least I can do for him,” Pryor says.

Father Bob Sims, one-time pastor at St. Simon where Peduto attended, leads the crowd in prayer. As Sims talks about who Peduto was as a person, he reveals that the name in Italian means “lost angel.” Sims continues describing his friend. “But Angelo was anything but lost,” he says. “He knew who he was, where he was going and what he wanted.”

Native American Indians and friends of scouting, Tony Showa and Teresa Webb, are invited to play peaceful strains on the tambourine and the flute. Webb tells the crowd she is playing her song on the medicine spirit flute. “The music helps to aid in healing by bringing peace,” she says. 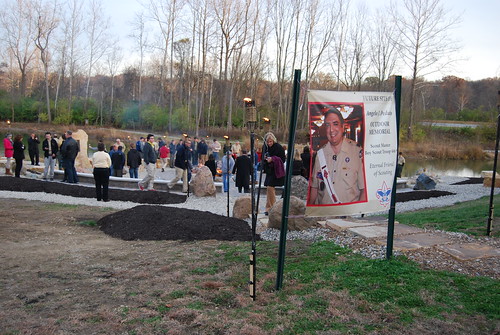 Then, Peduto’s children take their places at the front of the arena at each side of the large stone structure shrouded by a blanket, which also bears the Boy Scout insignia. With a drum roll building, Gia and Adrian Peduto remove the blanket revealing a bronze plaque bearing their dad’s likeness. The plaque reads: “In Memory of Angelo J. Peduto, Scoutmaster BSA Troop 446, Eternal Friend of Scouting. He whom we love and lose is no longer where he was before. He is now wherever we are.”

Next, in a magical display of light, Adrian Peduto shows off his Firecrafter skills as he ignites the bonfire using the fire by friction method. First, he rubs together a bow and a spindle which he carved from a branch.

While he continues rubbing, he rests the two pieces in a flatboard he made from red elm until they heat up, stopping just before it sparks. Then he carefully touches the smoking pieces to a small ball of straw called a “bird’s nest” made from separating the fibers of sisal rope.

In a series of dance-like moves, he waves the nest through the air, pumping it with the oxygen it needs to combust. The audience erupts as the ball ignites, and Adrian places the nest in the ring. Within moments, the bonfire is a tower of flames, the embers flying so fast they scatter across the entire area 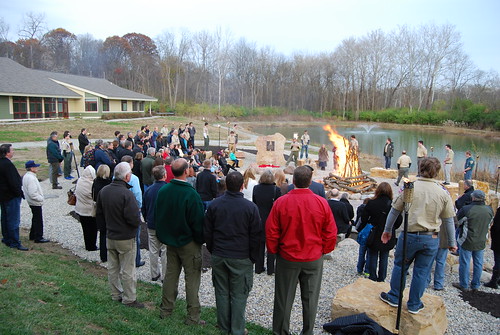 As the program nears the end, Scoutmasters Rench and Marlatt express their thanks to the dozens of people who were part of making this project a reality. They describe the countless hours and the blood, sweat and tears it took for the volunteers to construct the memorial. They also take care to recognize all those who donated materials or networked and negotiated to get best pricing. More than 40 tons of stone and 180 tons of gravel make up the memorial.

Peduto’s wife composes herself as she delivers the final remarks of the ceremony. “The meaning these guys put behind each piece of this memorial needs to ripple across the world,” she says. “I can’t wait for my kids to grow up, get married, bring their spouses and children to look at this and say ‘My God, this is so cool’.”