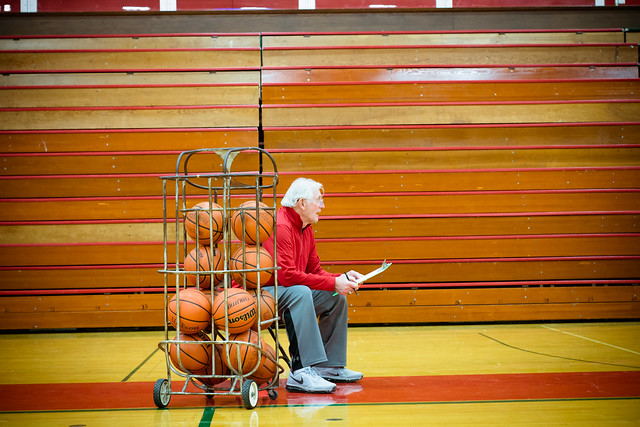 Perhaps if we dialed back a time machine, we may have a better perspective on the long and successful tenure that Jack Keefer has had coaching basketball at Lawrence North.

It was 40 years ago when Keefer arrived at the new high school in Lawrence. After graduating from Ball State (and earning his master’s degree at Indiana University and coaching at his former high school Oak Hill), the 34-year-old Keefer was selected to lead the inaugural Wildcat program.

Now think about this. That same year, there was a presidential election garnering attention; we were a long way from the Donald and Bernie. The incumbent Gerald Ford was matched against a Democrat from Georgia, Jimmy Carter. Some of the top movies released that year were “Rocky,” “Taxi Driver” and “All The President’s Men.” Sylvester Stallone, Robert De Niro and Dustin Hoffman were budding box office stars.

The median household income was $12,686, some new cars cost as little as $2,000 and a stamp for your letter was just 13 pennies. North siders enjoyed dining at establishments labeled Stable Inn, Victoria Station and a weird haunt called Caves and Caverns on 86th Street.

Meanwhile, Indiana and Indianapolis sports were moving forward. Market Square Arena was just two years old; Bob Knight and the Hoosiers were fresh off their 32-0 NCAA championship season; and Gene Keady was still an assistant coach at Arkansas. Not to be forgotten, a lanky lad named Larry Bird struck out at Indiana and returned to his friendly confines in French Lick. Three years later, Bird would push Indiana State to the Final Two of the NCAA tournament. 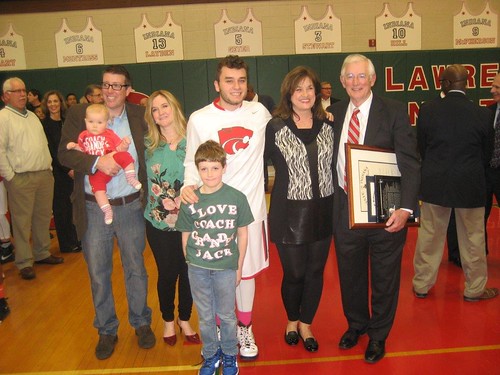 So, it was 40 winters ago when the Jack Keefer Era launched at Lawrence North. The first Wildcat edition managed a modest 8-13 season. Since that beginning, Keefer’s Green and Red squads have posted a remarkable 36 winning campaigns with only three losing sessions.

“I’m just so honored,” said an emotional Keefer as he was surrounded by local celebrities at the ceremony before the game with Center Grove. “They usually do these things when you are retired.”

The House that Jack Built
After a brief inspection of the honor roll of players and the trophies at the high school, it takes little time to see why Keefer was voted the United States 2006 High School Coach of the Year and selected to the Indiana Basketball Hall of Fame in 2007. Think about this resume:

As of February 19, Keefer’s Lawrence North outfits had attained 679 victories. (Including his Oak Hill marks, the total climbs to 740 victories, the fourth highest total by an Indiana high school coach.)

And let’s not misplace this year’s 16-5 Wildcats who feature numerous freshmen and sophomores but are ranked in the top 10 in the state. 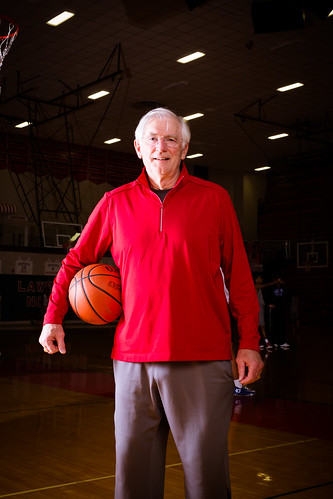 The Pundit
In 1976, Bob Lovell was a member of the Indiana basketball coaching fraternity, heading up Franklin College’s program. After that tour, Lovell moved to IUPUI and became athletic director and head basketball coach of the Jaguars. He was well aware of the talent that Keefer was molding.

“Jack teaches kids as well as anyone in the state,” said Lovell, now a top voice for high school sports in Indiana with his weekend radio network (Indiana Sports Talk). “He is just a tremendous teacher of the game.”

When Lovell was first watching Keefer’s team, the Wildcats ran mainly a motion offense. That has changed, noticed Lovell.

“He has adapted his style,” assessed Lovell. “He has four or five offenses that he can use. He has been able to mix in the old with the new. He still realizes the game is for the kids. You can tell that the players love him.”

Lovell also remarks that Keefer treats all players the same, stars or non-stars.

“Jack has really navigated well the politics of high school sports,” said Lovell. “Everyone understands that it doesn’t matter if you are a Division I player like a Montross, Conley, Oden or not. You will be treated the same.”

Lovell notes that Keefer could have succeeded at the college level if he had pursued the opportunity.

“There’s no doubt he could have coached at that level,” said Lovell of the 74-year-old Keefer. “But he found a home where he can have a family and where he can be impactful. And let’s remember, he still has the fire.”

The Sidekick
Jim Etherington has witnessed the fire in Keefer for almost two decades. He was a top assistant at Lawrence North for 14 years and was an assistant for another year at rival Lawrence Central.

“No one outworks Jack,” said Etherington. “And you don’t see burnout. He loves coaching, and no one loves being with kids more than Jack Keefer. He is passionate.”

That passion and teaching spills beyond the October to March timetable, said Etherington.

“He would be at the gym at 7 in the morning until 6 at night in the summer,” remembered Etherington. “He loves his family first, but he also loves the challenges to get kids to buy into a system. He is great with the x’s and o’s, but he is also a great motivator.”

And, Etherington recalls, Keefer was clever in inserting psychological moves into his strategies. For instance, Keefer is known to be properly attired on game nights. He and his assistants wear suits with ties and white shirts.

“Jack believes game nights are 20 of the most important nights of the year,” Etherington said.

But there have been nights when Keefer shows up in a denim shirt with jeans and puts a Men at Work sign behind the Lawrence North bench.

In another pitch of motivation in 2001, the Wildcats were about to face rival Pike without ailing all-state player Chris Hill. Before practice, the players entered a room attached to the gymnasium. The room was dark and contained about 50 flaming candles. It also hosted a closed casket.

A few moments later, Keefer sprang out of the casket and declared, “We’re not dead yet.” The players howled in delight, and the undermanned Wildcats defeated Pike the next night.

“It always seemed that the bigger the challenge, the better his teams play,” said Etherington. “He always makes you think that you can get anything done.” 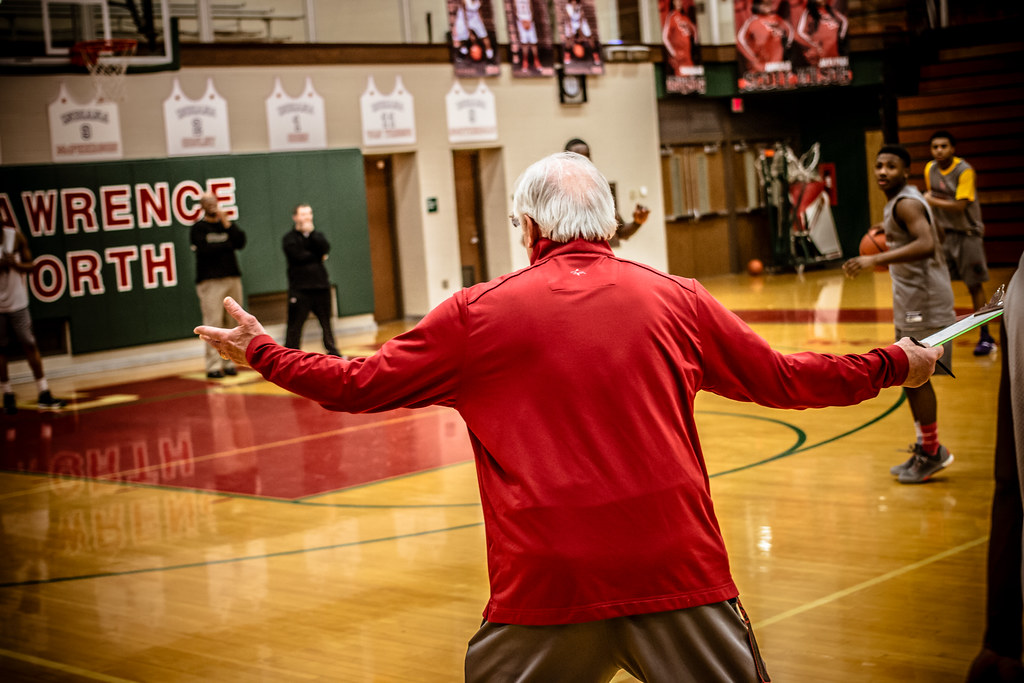 “We have had a wonderful relationship,” Nesbit said. “This may be his 48th year of coaching, but he works just as hard as he ever has. He is so competitive, but he also knows when it is time to fight and when it is not time to fight. He understands what it takes to have a good organization.”

And, according to Nesbit, Keefer has learned to adjust from coaching athletes in the 1970s to those in 2016 and beyond.

“He’s been flexible,” said Nesbit. “A lot of coaches may not be able to adjust to today’s kids, but Jack has learned to tolerate things that he may not have tolerated 40 years ago.”

“In some ways, he is a survivor,” said Nesbit. “He understands kids and parents, but he is not interested in coaching the parents. He wants to win, but he also understands the bigger picture of making the kids better as players and people.”

The Partner
They say that behind every good man is a good woman. Perhaps no one fits that description better than Jan Keefer whose favorite seat at Lawrence North games in behind the Wildcat bench. And her most fond time of the night is greeting husband Jack immediately after the games.

“She is with him every step of the way,” said Etherington. “They are a team.” Their son Jake is also a Wildcat senior.

For the female Keefer, the games add more hours to her schedule. In the day time, she is a top attorney at Bingham Greenebaum Doll, one of the city’s top law firms.

“But she also knows the game,” Etherington said.

And as everyone else knows in Indiana, perhaps the top active high school coach is Jack Keefer, author of Jack Keefer Gymnasium.