Greenwood is a city rapidly redefining itself. Intentional growth plans have been developed by community leadership. Spearheaded by Mayor Mark W. Myers, the Common Council and several commissions, plans are underway for strategic growth patterns that will enhance the economic vitality seen in recent decades. What can we expect to see happening in 2016?

• Old Town Greenwood will begin work on Phase One of updating facades of most downtown businesses buildings.
• Greenwood Public Library continues to offer an extraordinary amount of activities, programs and a stimulating educational environment.
• Greater Greenwood Chamber is moving its wildly popular, annual “Taste of the Southside” event to November at a new location.
• Greenwood Municipal Airport continues to grow its capacity.
• Greenwood Community Center begins renovations in April that will shutter it for eight to nine months.
• Freedom Springs Aquatics Park will have new additions for its second summer season. 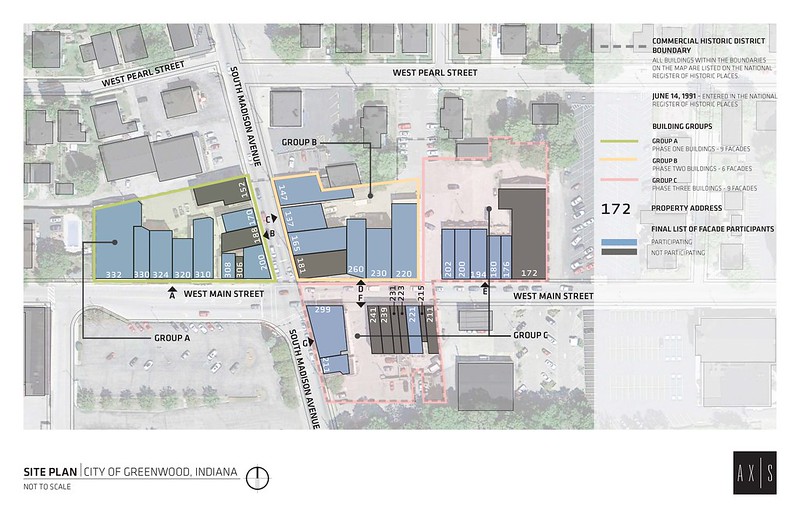 OLD TOWN GREENWOOD will work on Phase One of restoring building facades in downtown beginning on the north side of West Main Street – addresses 308-332. A total of nine facades in structurally sound buildings will include the corner one at 200 S. Madison and No. 170 north of it. Phase Two would be for building numbers 137, 147 and 165 S. Madison Ave. and 230, 260 and 320 W. Main St. Phase Three includes the restaurant Revery and six participating buildings farther east along both sides of W. Main Street. Seven of 13 building owners are not involved with any phase of this largely grant-funded project.

GREENWOOD PUBLIC LIBRARY is a celebration of the passion that our community has for learning and claiming ownership of all that the library offers. Just four years ago, GPL was nearly insolvent. But the community rallied in word and deed around the energetic leadership of new director Cheryl Dobbs. She made necessary cuts to staff and services while the community raised funds in multitudes of self-directed ways. Friends of the Library raised funds as did numerous individuals and small businesses.

There was a palpable community sense of “This is OUR library, and it will survive and thrive.” Today the parking lot is full every time the doors are open. The library holds copious amounts of programs and classes monthly on top of providing a bright, welcoming environment for locals to hang out, work on computers, do research or simply read. GPL is always a ‘Happening’ place.

TASTE OF THE SOUTHSIDE is moving in two ways in 2016. This Greater Greenwood Chamber event has become so popular that it has outgrown the original host location and is moving.Because of that location change, the date is also shifting from February to November 13, 2016.

GREENWOOD MUNICIPAL AIRPORT has plans to add six new hangars and make improvements to existing ones. Taxiways were redone to handle all the increased business after the main runway grew to 5,100 feet. “We are focused on bringing more corporate traffic to our airport,” states Greenwood Mayor Mark W. Myers. “We are the closest airport to downtown Indy, and these improvements are another reason that we are the best choice for business and convention travel.”

GREENWOOD COMMUNITY CENTER will undergo a massive remodel beginning in April. All exercise rooms will move downstairs to the area filled with windows near the parking lot. Both women’s and men’s locker rooms will be nearby. Basketball courts remain where they have been.

The children’s area will become highly interactive with bright colors and plenty to do. A huge climbing wall of net with mini-platforms to use as steps will be one way that children can move from the lower level action Kids Zone to the upstairs Imagination Station for quieter activities. The center will be closed for eight to nine months during this remodel. New and renewed memberships will be good through 2017, says Rob Taggart, Parks and Rec Director.

FREEDOM SPRINGS AQUATICS PARK has succeeded beyond all projections. Due to popular demand, a new shelter house and a cabana are being added. The aquatics park usually is open Memorial Day through Labor Day.

2016 looks to be a lively year of pride and progress in building community.

Alive & Thriving: The Arts in Greenwood