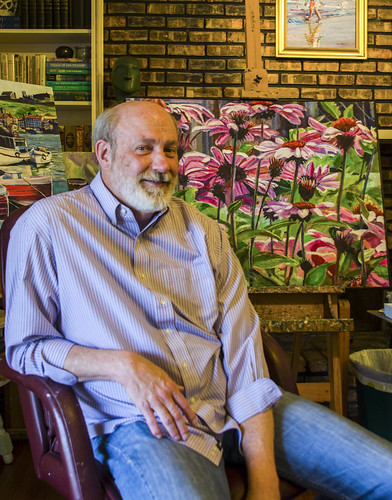 Those who say “choose a job you love, and you will never have to work a day in your life” never met Tom Slack. The Greenwood artist has earned acclaim over the past 20 years for his high-contrast impressionistic style, but it took decades of hard work to get there. For the better part of Slack’s life, becoming an artist and doing what he loved was a dream deferred.

Slack demonstrated a gift for art from an early age. Even before he started kindergarten, he would draw his portrait while looking in a bathroom mirror or create pictures of the stories from Sunday school lessons. His elementary school teachers called in Slack’s parents and praised his talent. However, Slack’s mother and father didn’t encourage his ambition — quite the opposite. Their Depression-era memories of trying to earn enough money to provide for a family stuck fast, and becoming a “starving artist” wasn’t a feasible profession. (Oddly enough, Slack’s paternal grandmother had been a professional artist who did well; odder still, his parents hoped for their children to become musicians — a profession not often associated with job stability or a steady paycheck.) With his musical talent encouraged, Slack became something of a violin prodigy but disliked it. “I had dreams of laying my violin on the floor, climbing on top of my mother’s piano, and jumping off and stomping on my violin,” he says. In high school, the closest he came to art was making pre-game posters for the cheerleaders.

After graduation, Slack, a Utah native, struggled in choosing college courses. “I went through the catalogs while trying to decide what to major in,” he recalls. “Suddenly I’d see something that looked interesting, but it had to do with art, and I knew it would be wrong for me to major in that terrible subject,” he says, wagging a finger like a stern schoolmaster. He put all thoughts of creative classes aside and instead studied subjects where he “could make a good living.” For the next 20 years, he took on various sales jobs to support his wife, Norene, and their seven children. “I was absolutely bored,” he remembers. “I was very unhappy with what I was doing.” 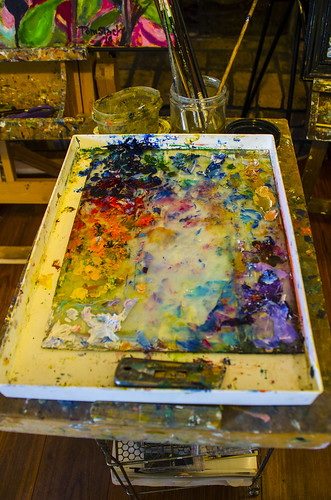 A Decision
In March 1995, fate struck in the guise of a snowstorm. Slack was staying at a hotel in Vernal, Utah, waiting for a sales appointment that afternoon. The hotel manager wouldn’t let him stay past checkout time, so Slack decided to go for a drive. He drove his small Toyota Corolla into the mountains and got stuck in a snowbank near the top, where he spent hours trying to claw and kick away the hardened snow. As night fell, he stuffed his 6’4” frame into the backseat and tried to get warm, but his shirt sleeves were wet, his arms and hands were bleeding and he didn’t have a coat. Late that night, freezing and despondent, Slack started to think about what it would be like to die and the sadness of life not fully lived. “I just thought, ‘What a shame,’” he says. “I thought it was a shame that I had wasted my life doing what someone else wanted me to do. I decided then that if I made it out, I’d bag it and be an artist.”

Slack doesn’t remember exactly how he made it down the mountain the next morning, only that he was finally able to get out of the car and walk a little ways before a farmer found him. As soon as he recovered from a mild case of frostbite, Slack quit his job on the spot and signed up for art classes at Salt Lake Community College. His wife’s reaction? “Hallelujah!” she exclaims. “I remember him coming home from his first figures class, and his eyes were bright.”

Hard Work and Success
Slack transferred to the University of Utah a year later and spent the next two years working full time while taking 20-24 credit hours each semester. He earned a Bachelor of Fine Arts in 1998, and then he and Norene moved to Greenwood to be closer to their grandchildren and two of their daughters, who live in Avon and Fishers. Even though Slack had finally realized his dream, carving out a spot in the art world wasn’t easy. He spent more than a year contacting galleries and trying to get in to art shows, but no one was interested. Finally, Mass Ave’s 4 Star Gallery gave him a chance, which led to his work being featured in Hilbert Circle Theatre.

He drove to Madison and Rising Sun and found gallery owners who wanted to represent him. Offers from galleries in Milwaukee, Detroit and St. Louis followed. In 2002, Slack submitted a large oil painting of an art student in the professional fine arts category at the State Fair. When he went to see it after judging, he was disappointed to find all the other entries but his had received ribbons. Later that day, a friend called to congratulate Slack on “that big ribbon”: He’d won the Governor’s Choice award, which earned the painting a spot in the governor’s mansion and Slack a lunch with Governor Frank O’Bannon and first lady Judy O’Bannon. 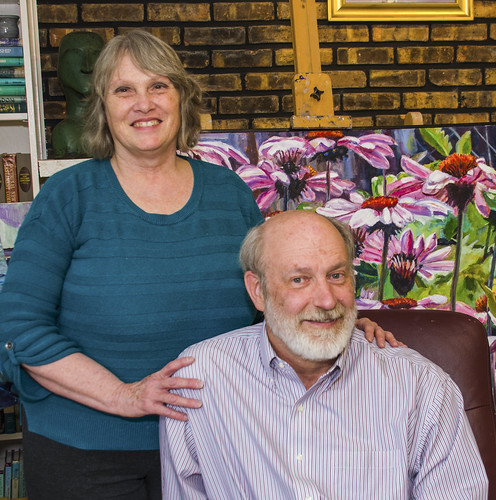 All of the work came with a hefty price in 2010 when Slack had to have back surgery. He spent 40 days in the hospital, 19 of them in the Intensive Care Unit. The stress took a toll on his ability to draw, something he now does four hours each day. Norene brought in a sketching pad so Slack could draw while he recovered, but he could only make scribbles. Fortunately, the talent he’d honed for years came back over time. “I just cried the first time he could draw a face,” Norene remembers. “Now his work is more vibrant; it’s even better than it was.”

Today Slack paints in his living room where finished canvases of cityscapes, landscapes and various figures rotate down the hallway and back again until he finds homes for them. He also teaches workshops and has many funny and touching stories of commissions he’s done for people all over the world. “I was working so hard, and now I have more work than I can keep up with,” he says. He and Norene have 23 grandchildren; his only son is an artist. Though his father has died, Slack’s mother has seen her son follow his heart and is one his biggest supporters next to Norene. Sixty-four this month, Slack says he will continue to paint until he can’t pick up a brush. “Art has been a wonderful part of my life,” he says. “It happened a lot later for me, but I’m so glad I pursued my dream.”